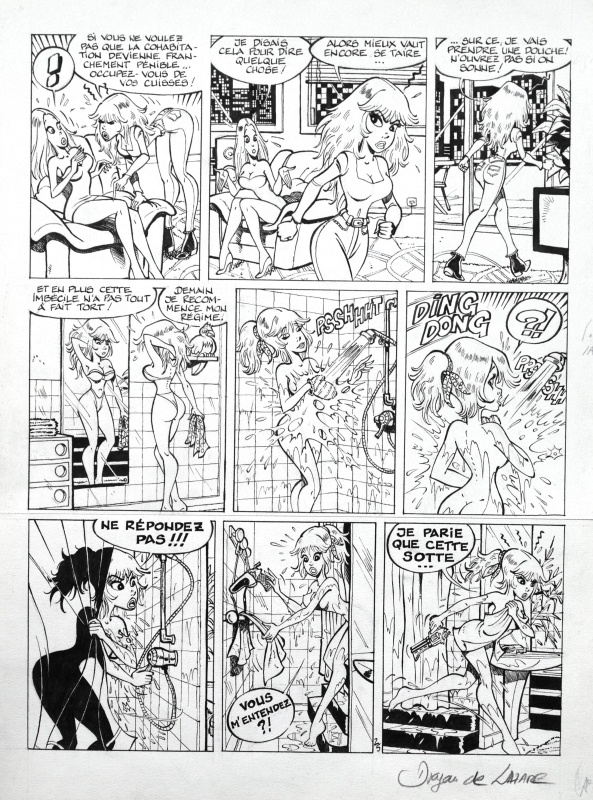 Dragan de Lazare was born in Rio de Janeiro, Brazil, in 1964 into a family of Yugoslav diplomats. He became interested in comics by reading the work of franco-belgian artists like Macherot, Deliège, Tillieux, Hermann and Franquin. In 1986, he decided to move to Paris, where he received an education in interior decorating. At the same time, he made several comic pages for Yugoslav comic magazines like Strip Zabavnik and Val Strip. In 1989, his work first appeared on the French market with 'Le Témoin', an album starring 'Yves Rokatansky'. Two years later, De Lazare met Mythic, who asked him to participate in the creation of 'Rubine' with François Walthéry. De Lazare has illustrated this police series until 2002, and then handed over the artwork to Boyan. He has also contributed to the Belgrade comic magazine Finesa. De Lazare eventually left the European comics profession and is now an editor of greetings cards in Belgrade, Serbia. He has also been working on new comic book projects with Bozidar Milojkovic (Bam), such as the adaptation of the classic western movie 'High Noon'. Text (c) Lambiek
Go to Dragan De Lazare's page
Remove from favorite artists  Add to favorite artists