In boby  's collection
Back to gallery 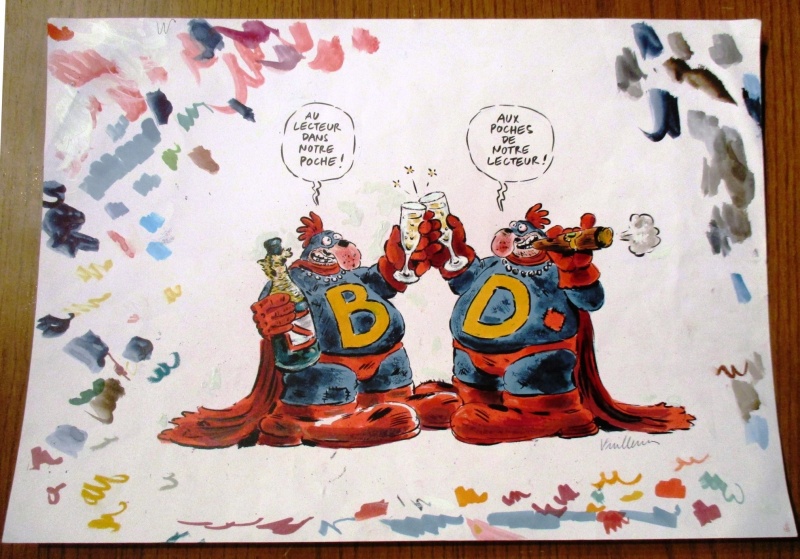 Philippe Vuillemin made his professional debut in 1977 with some short stories in L'Écho des Savanes, Hara-Kiri, and Charlie Mensuel. Vuillemin turned around all the conventions of the comic strip, and ignored all taboos. These first comics were subsequently collected in the albums 'Saine Ardeur', 'Sueurs d'Homme' and 'Frisson de Bonheur'. In 1984,Vuillemin created 'Raoul Teigeux contre les Druzes' with Jackie Berroyer and took over the series 'Sales Blagues' from Reiser in l'Écho des Savanes. For this series, Vuillemin worked with Jean-Marie Gourio. Vuillemin's 'Les Sales Blagues de l'Écho' have been collected in several books by Albin Michel and Drugstore since 1987. A TV adaptation was realized in 1995. Also in cooperation with Gourio, he produced 'Hitler=SS' for Hara-Kiri. After 1984, Vuillemin expanded his artistic activities, working for magazines like L'Ebdo, Zoulou, Grand Café and Zéro. In 1989 he illustrated the provacative texts of Professeur Choron in 'Les Versets Satanique de l'Évangile'. Text (c) Lambiek
Go to Philippe Vuillemin's page
Remove from favorite artists  Add to favorite artists