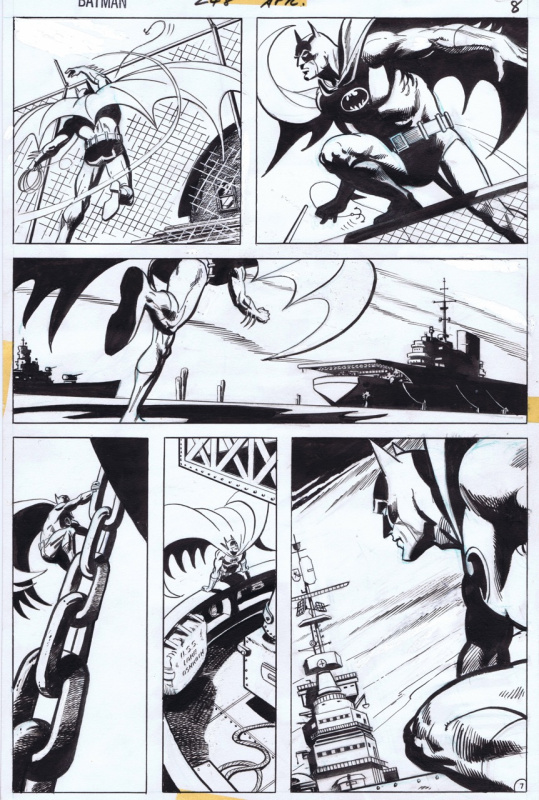 "brown soon developed a tight, clean, and straight-forward interpretation of the Caped Crusader. It can be argued that he did not convey the back-to-its-roots air of mystery the Dark Knight (and his fans) so enjoyed in the early 1970s, but the artist was no slouch. Brown made you feel that Batman was a determined detective. My favorite Caped Crusader tale illustrated by Brown isn't even in Detective, but in a more 'obscure' location. What's so obscure about having your work published in an issue of Batman during that time? Simple. Neal Adams.

lt’s somewhat unfortunate that Adams’ undeniably dynamic work on Batman towers over his Bat-contemporaries. Fortunately, Irv Novick, ]im Aparo, and Frank Robbins (as artist) have garnered due recognition over the years. Not so with Brown, however, which is a shame, because his pencil work on 'Death-Knell For a Traitor' (Batman #248, Apr. 1973), written by Denny O'Neil and inked by Dick Giordano, is outstanding. Had it been illustrated by Adams, this account of an American traitor during World War ll, whose release from Gotham prison 30 years later attracts the interest of Batman and his nemesis Colonel Sulphur, would have been reprinted a hall-dozen times. l can't imagine Adams’ visual take on this tale, as Brown leaves such an indelible mark on it.

Not even the startling Michael W. Kaluta cover and Brown's dramatically paced 'silent' page 7 has generated much attention to this particular comic."

William Robert (Bob) Brown studied at the Hartford Art School in Connecticut and at the Rhode Island School of Design. He did his first comic book work for Timely ('Young Hearts'), National Periodicals ('The Vigilante') and Ziff-Davis ('Famous Stars', 'Kid Cowboy') and worked for both Timely/Atlas and National/DC throughout the 1950s, 1960s and 1970s. He cooperated on both company's mystery, war and romance titles, including 'Star Spangled War Stories', 'Challengers of the Unknown', 'House of Mystery', 'Tales of the Unexpected' and 'Tomahawks' (DC), and 'Mystery Tales', 'Justice Comics' and 'True Comics' (Atlas). Brown was the graphic creator of the 'Space Ranger' character, that appeared in DC's 'Tales of the Unexpected' comic book from 1959. Brown illustrated every story until the comic's cancellation in 1965. He also drew DC's 'Superboy' and 'Tom Sparks Boy Inventor'. In the 1970s, Bob Brown illustrated such Marvel titles as 'Torpedo', 'Daredevil', 'Spider-Man', 'Lilith', 'Luke Cage Power Man' and 'Avengers'. Text (c) Lambiek
Go to Bob Brown's page
Remove from favorite artists  Add to favorite artists