In Doyle 's collection
Back to gallery 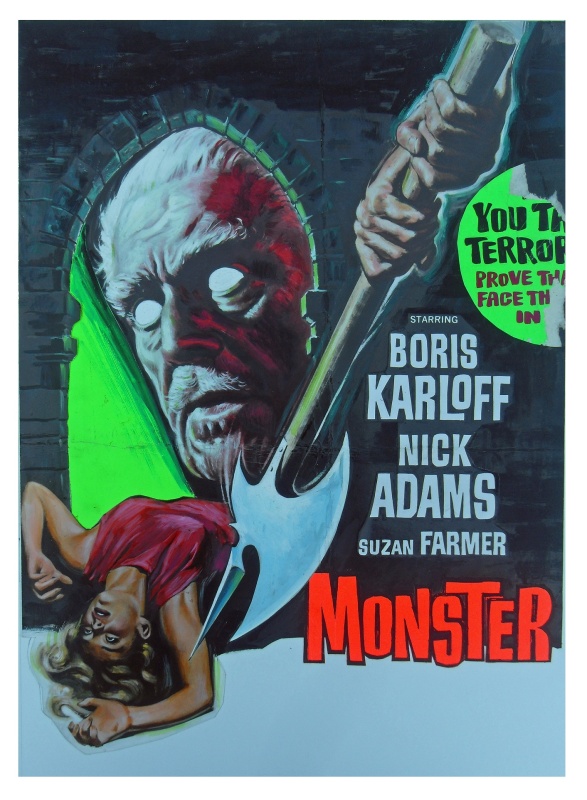 Revised artwork, by Tom Chantrell, of the American 1965 cinema release movie poster painting by Reynold Brown for DIE, MONSTER, DIE!, using a high-quality copy of Brown's artwork as its basis.

For the UK release, a year later, the movie was re-titled, MONSTER OF TERROR, and was double-billed with THE HAUNTED PALACE.

Chantrell directly used the copy of Reynold Brown's artwork, re-painting parts of it to modify the image for the UK release. I'd roughly estimate Chantrell's re-painting at around 35% of the overall image.

For whatever reason, the MONSTER OF TERROR half of the double-bill poster artwork was later removed from the overall painting and, at some stage, the revised artwork was badly folded - in the process losing parts of the pasted-up title and production credits.

There appears to have been several versions of Chantrell's revised MONSTER OF TERROR artwork. I've included some additional images, here, but have yet to track-down a poster design that fully-matches the artwork on hereby displayed.

Basically, this was an inexpensive purchase for me, bought mainly for the cool image. In the near future, I'll attempt to have this 'original' restored as best as damn-it. So, at the moment, this is pretty much a 'project' in waiting . . .