In MV9957  's collection
Back to gallery 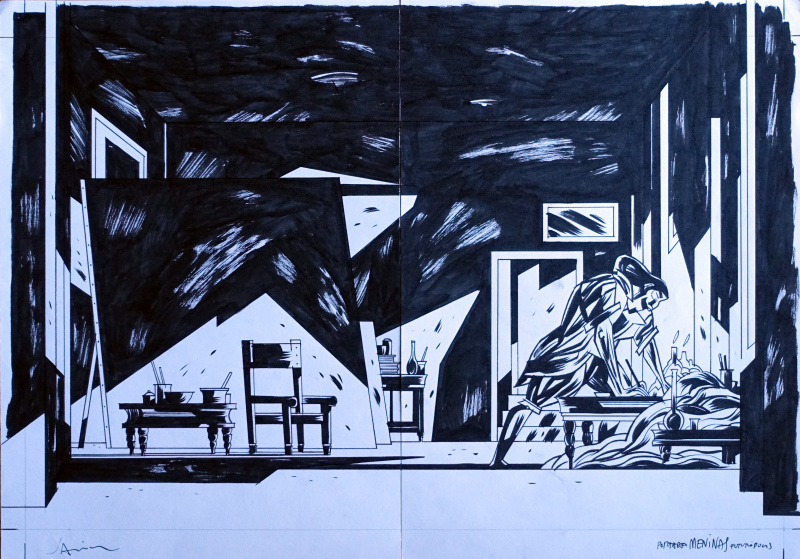 Born in Madrid, Javier Olivares has been working as a comic artist, illustrator and children's book author since 1985. He is the publisher of the fanzine Owo and co-founder to the Ediciones Malasombra. He has contributed to magazines like Madriz, Medios Revueltos, La Maleta, Idiota y Diminuto, Nosotros somos los Muertos, Strapazin from Switzerland, and to anthologies like 'Cuentos de la Estrella Legumbre', 'Tiempo Muerto' and 'Nueve Preguntas'. His stories have been compiled in monograph form, such as 'Estados Carenciales' and 'La Caja Negra', both of which were nominated for Best Album at the Salo Internacional del Comic de Barcelona. He has worked on several projects with comics writer Santiago Garcia, including the graphic novel 'El Extraño Caso del Dr. Jekyll y Mr. Hyde' (Editorial SM) and an unpublished adaptation of 'Beowulf'. Olivares is additionally an illustrator for children's stories (such as 'Prisonieros de Zenda' with Fernando Marías and 'Los Niños Tontos'), and for magazines like El Pais de las Tentaciones, the Spanish edition of Rolling Stone and the popular science magazine QUO. He has also worked as a designer/director on animated short pieces.
Go to Javier Olivares's page
Remove from favorite artists  Add to favorite artists
To leave a comment on that piece, please log in