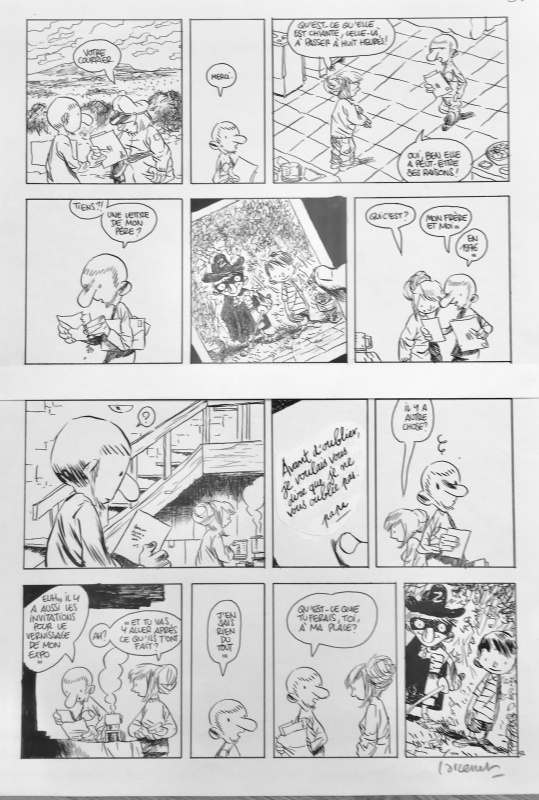 Manu Larcenet is one of the leading artists in contemporary franco-belgian humor comics, and one of the main contributors to Fluide Glacial magazine. Born Emmanuel Larcenet in Issy-les-Moulineaux, he studied art in Sèvres. While also performing as a singer in a punk band, he published his first artwork in comic and rock fanzines. Larcenet has also been a frequent artist for the collection Poisson Pilote of the publishing house Dargaud, producing series like 'Les Cosmonautes du Futur' (with Lewis Trondheim, 2000-2004), 'Les Entremondes' (with his brother Patrice Larcenet, 2000-2001), 'Une Aventure Rocambolesque de...' (2002-2009) and 'La Légende de Robin des Bois' (2003). Notable was the autobiographical series 'Le Retour à la Terre', that he created with Jean-Yves Ferri after settling in the Lyon area in 2002. Also for Dargaud, he created the autobiographical series 'Le Combat Ordinaire', starting in 2003, and 'Nic Oumouk', starting in 2005. Larcenet is the artist of the 'Donjon' side series 'Donjon Parade', written by Lewis Trondheim and Joann Sfar and published by Delcourt between 2000 and 2007. Since 2008 he is the artist of the graphic novel series 'Blast', that is published by Dargaud. Manu Larcenet is the author of the children's books 'Les merveilleux Peu de gens savent' (2010) and 'Nombreux sont ceux qui ignorent' (2012). Text (c) Lambiek
Go to Manu Larcenet's page
Remove from favorite artists  Add to favorite artists
12 comments
To leave a comment on that piece, please log in