Sign up
In giacod  's collection
Back to gallery 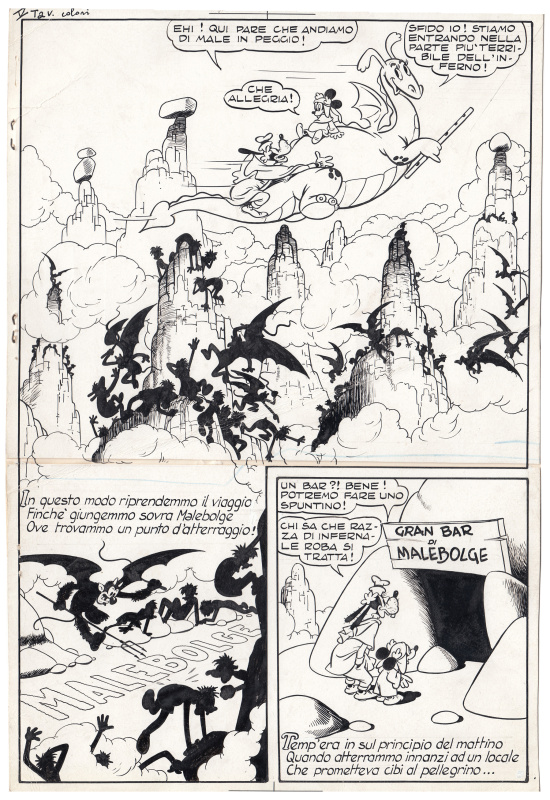 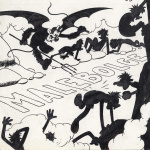 Page from Chapter 5, published for the first time on TOPOLINO magazine num. 11 (INDUCKS I TL 11-A).

* TRAVELING TO THE DEEPEST HELL

We are in the fiftieth plate of Mickey's Inferno, fourth page of the fifth comic episode by Bioletto and Martina, published for the first time in Topolino booklet number 11 of February 1950.
As a replica of what happens in the 17th Canto of Dante, a very graceful Disney version of the otherwise monstrous Geryon accompanies Mickey and Pippo on the threshold of the Malebolgia.
This table is a very special page among those designed by Bioletto for the Inferno: although the original is quite small compared to others richer in vignettes or even with a similar structure, it in fact highlights a series of peculiarities that make it unique.
First of all, it is one of the very few pages in the entire history to possess a landscape breath. This happens not only, trivially, for the presence of a quadruple cartoon and for the subject depicted, but, also and above all, for the relationship that is established between the characters and the background, between the protagonists and the background.
Plate 50 is the only one in which Bioletto, while depicting a large group of devils and damned (there are 10 and 37 respectively in the quadruple panel alone), resorts to the stratagem of bringing them back to the level of the sun silhouette, keeping them well away from the plastic outlines of the protagonists.

In doing so, the Turin artist applies to the image a representational finesse which, on the one hand, serves him not to excessively mix the drawing with frills and superfluous details, and, on the other hand, allows him to accentuate the drama of the scene represented, making the extras an inalienable and immutable part of the background, in a deafening silence - actually heart-breaking lament - above which the chatter of travellers on the back of a dragon invariably acquires even more prominence.
It is by virtue of a subtle balance, guaranteed precisely by this graphic artifice that the two acting classes - devils and damned on the one hand, the divine poet and his guide on the other - manage to find an effective equivalence.
Compared to the solutions adopted in other important and similarly splash pages - think, for example, of the incipit of Canto X - the achievement of this result must not have been immediate by Bioletto and, indeed, some clues lead us to suppose that it was the result of some suffering and experimentation. This is especially evident in the relationship between the quadruple image and the two subsequent panels that complete the page. In them, while presenting more conventional shots, nonetheless the silhouettes depicting devils and the damned are maintained. A careful analysis of the drafting of the ink shows us how these characters were initially defined by line, similarly to what happens in the rest of Disney's hell. Only later, therefore, the white backgrounds were filled with black. In addition, in the last panel, the shadow that does not let you see the interior of the Grand Bar of Malebolgia in turn hides a figure that probably coincides with the devil bartender with whom the vignette on the next page opens. In short, it is a series of corrections in progress that give us an iconic unicum compared to the creative process adopted by the master in the graphic drafting of one of the most complex pages of the entire hellish cycle.

The very explicit references to Gustavo Doré's drawings, both in the depiction of the landscape and in the posture of the characters, do nothing but embellish the art with further hyper-texts, arousing amazed admiration for the skill with which Bioletto has been able to translate images into Disney shapes in themselves so perfect that they are often considered difficult to reuse or to reinterpret.

The art has been also used for several covers and cover interiors (for example: “Le grandi Parodie, vol. 2". Disney Libri, 1992; "From Hell to a Bisbetic Duck". Published for the exhibition "50 years of Disney Parodies”. Walt Disney Italy, 1998). 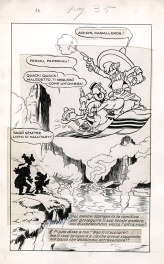