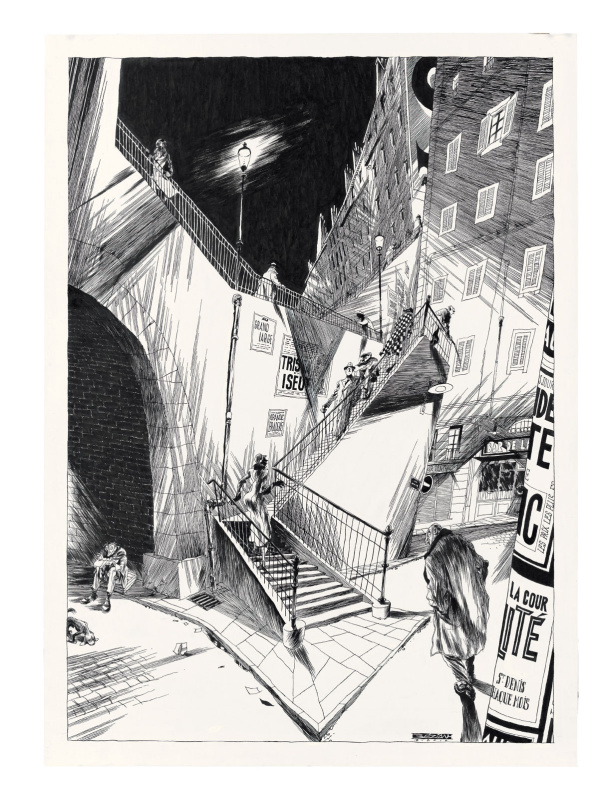 Born in Haute-Garonne, Frédéric Bezian started out contributing to fanzines like Djin. Between 1979 and 1981 he took courses by Claude Renard and François Schuiten at the Institut Saint-Luc in Brussels and also published in the atelier's magazine Le Petit Neuvième Rêve. In 1982, he published 'L'Étrange Nuit de Monsieur Korb' at Magic Strip and 'Ginette, Martine, Josiane...' at Futuropolis. Between 1983 and 1986 he published several dark short stories in À Suivre, that were later collected in the album 'Totentanz' by Magic Strip. Since 1989, Bézian has created several albums at the publishing house Les Humanoïdes Associés, such as the trilogy 'Adam Sarlech', 'La Chambre Nuptiale' and 'Le Testament sous la Neige'. In the 1990s, he was present at several independent publishing houses such as Amok, where he contributed to Le Cheval Sans Tête. He drew 'Chien Rouge, Chien Noir' for the magazine Brazil in 1994. In 1997, he created 'Archipels' at PMJ Éditions. In addition, between 2000 and 2003, he participated in several anthology publications, and contributed to German and Japanese magazines. He returned to comics in 2004 with the album 'Ne Touchez à Rien' from a script by Noël Simsolo at Albin Michel. In 2006 he drew an episode of the 'Donjon Monstres' series by Sfar and Tronheim Text (c) Lambiek
Go to Frédéric Bézian's page
Remove from favorite artists  Add to favorite artists
8 comments
To leave a comment on that piece, please log in