Sign up
In DrHackenbusch  's collection
Back to gallery

Popeye the Sailorpedia:
"A Sock for Susan's Sake - Just a Simple Story of Life" (published from May 4th 1937) is a Thimble Theatre storyline detailing Popeye's first meeting with Susan Brown and his attempts to save her and her family from a life of poverty. Unlike Popeye's other adventurous or comedic yarns, this one is a depression-era story with a focus on drama and a strong message about doing what is right without selfish motivation.
To leave a comment on that piece, please log in

Elzie Crisler Segar was one of the classic American cartoonists of the 1920s and 1930s, best known for creating the world famous sailor 'Popeye'. Born and raised in Chester, Illinois, he held several odd jobs before turning to cartooning. He worked as a house painter and muscian during vaudeville acts before becoming a film projectionist in a movie house. Inspired by seeing the humorous movies of Charlie Chaplin, he created comic strips copying the same situations. These had no success, until Segar met Richard Felton Outcault, creator of 'The Yellow Kid', who encouraged him to carry on and introduced him at the Chicago Herald. Segar, who had no formal art training, was hired by the Herald as the artist of the daily 'Charlie Chaplin's Comedy Capers' strip, which he drew from 28 February until 15 July 1916. His run on the Sunday strip lasted longer, from 12 March 1916 till 16 September 1917. By then, Segar had created his own character 'Barry the Boob', whose adventures ran in the Herald from 23 September 1923 until 28 April 1918. He then moved over to the Hearst papers, where his first creation was 'Looping the Loop' for the Chicago Evening American between June 1918 and 1919. It wasn't until ten years later that Popeye was introduced to the comic. The sailor, immediately becoming the star of the show and captured a large, world-wide audience. Text (c) Lambiek
Go to Elzie Crisler Segar's page 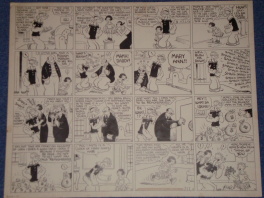 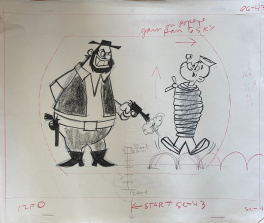 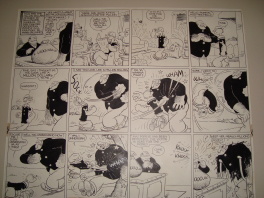