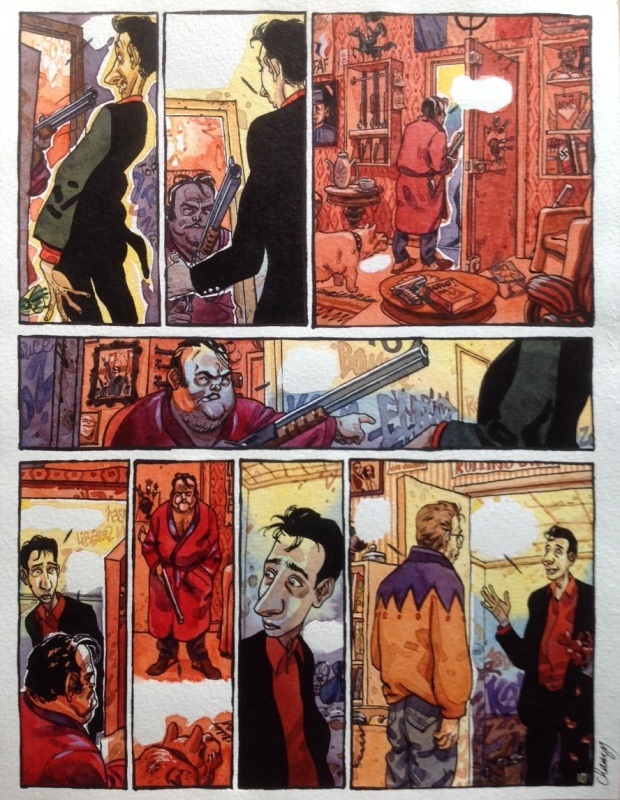 Jean-Christophe Chauzy made his album debut in 1988 with 'Vengeance', which was published in the collection X by Futuropolis. By 1990, Chauzy had already finished two other albums, but these didn't appear due to the folding of the collection. They were eventually published under the title 'Novice' by PLG ten years later. Chauzy continued to cooperate with Futuropolis during the early 1990s, creating 'Bayou Joey', 'Les Écorchés' and 'Sans Rancoeur'. From 1992, he was present in the magazine À Suivre. He cooperated with Matz on several short stories, that were collected in the album 'Peines Perdues' by Casterman. In 1993, he made 'J'ai Tué mon Prof' with Mosconi at the publisher Syros. In 1995, he published 'Parano' at Casterman and made 'Béton Armé' in À Suivre. He also contributed to the alternative comics magazine Ogoun!. Also for Casterman, he produced 'Le Peau de l'Ours' in 1998, and created 'Clara' with Denis Lapière between 1999 and 2002. In 2000, he was present at Les Rêveurs de Runes with 'L'Âge Ingrat'. He also teamed up with the novelist Thierry Jonquet and adapted 'La Vigue' and 'La Vie de ma Mère' in 2001 and 2003 and cooperated on 'D.R.H.' (Casterman, 2004) and 'Du papier faisons table rase' (Casterman, 2006). With Marc Villard, he made the graphic novels 'Rouge est ma couleur' (2005) and 'La Guitare de Bo Diddley' (2009), also for Casterman. Together with Zep.
Go to Jean-Christophe Chauzy's page
Remove from favorite artists  Add to favorite artists
5 comments
To leave a comment on that piece, please log in