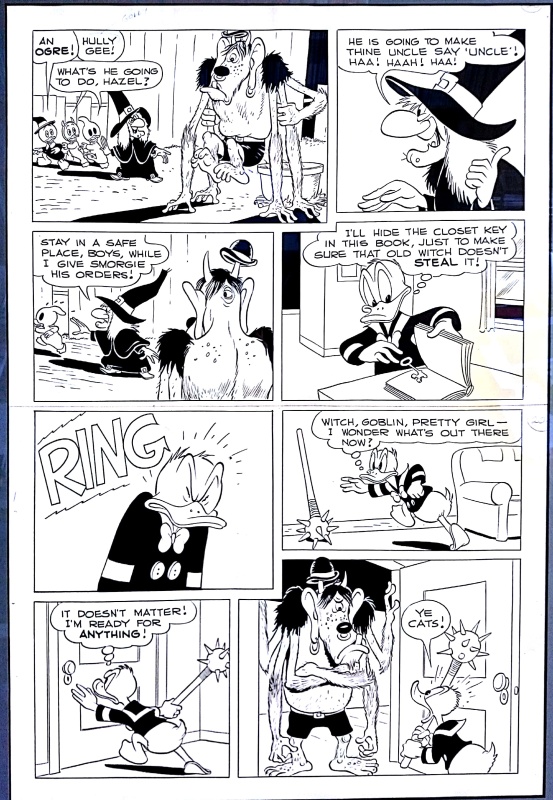 Carl Barks pencilled and inked over 6000 pages. Nearly all of them were destroyed at the printing plant. Today only around 200 finished and inked Barks original pages and covers are in existence, most of them from the mid-1960s. From Barks´ prime period 1947-1953, only around 15 pages still exist (all of them outtakes and censored pages). This is a cultural tragedy.
This page was created for the Donald Duck Trick or Treat story, published in Donald Duck 26, 1952. It belongs to a nine page sequence that was censored at the time and not included in the published version. Presumably it was censored because of the scary elements, not least the ogre Smorgasbord, prominently featured in this page.
The uncensored Trick or Treat story was first officially published in the Netherlands in 1984 (I believe). First US publication in Another Rainbow´s Carl Barks Library in 1986. The last one is more complete than the Dutch version.
The German company 313 made a signed lithograph out of this page in the 1990s. But rest assured, this is the original. Compare a scan of the litho in the additional image.
#witches

Carl Barks (March 27, 1901 – August 25, 2000) was an American cartoonist, author, and painter. He is best known for his comics about Donald Duck and as the creator of Scrooge McDuck. He worked anonymously until late in his career; fans dubbed him The Duck Man and The Good Duck Artist. In 1987, Barks was one of the three inaugural inductees of the Will Eisner Comic Book Hall of Fame. Barks worked for the Disney Studio and Western Publishing where he created Duckburg and many of its inhabitants, such as Scrooge McDuck (1947), Gladstone Gander (1948), the Beagle Boys (1951), The Junior Woodchucks (1951), Gyro Gearloose (1952), Cornelius Coot (1952), Flintheart Glomgold (1956), John D. Rockerduck (1961) and Magica De Spell (1961). Cartoonist Will Eisner called him "the Hans Christian Andersen of comic books."
Go to Carl Barks's page
Remove from favorite artists  Add to favorite artists 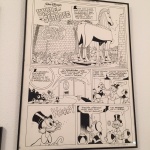