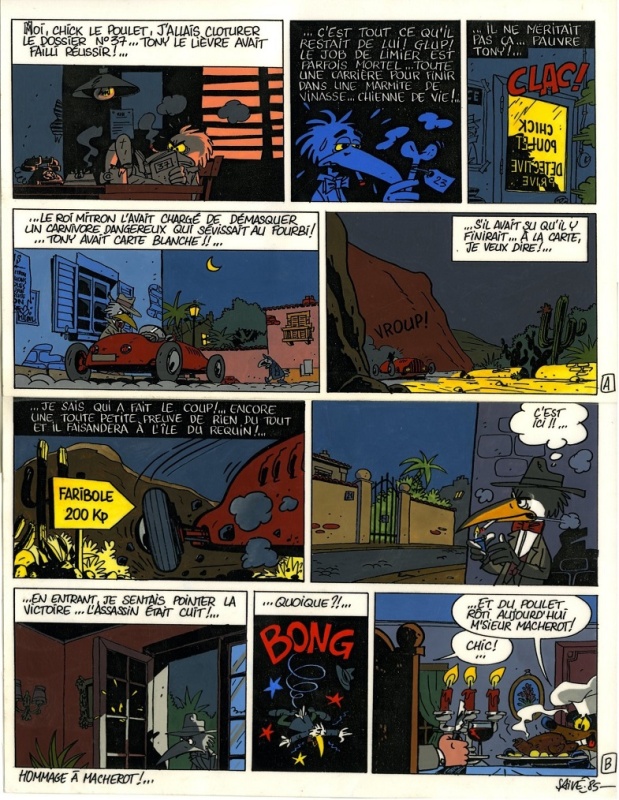 Saive created his first album, 'Virage', in the Atomium collection of the publishing house Magic Strip in 1984. He then fulfilled his military service, and returned to the profession with his 1987 album 'La Ligne Universelle', published by Éditions du Miroir. Around this time, he also cooperated on several advertising and infographic projects, as well as TV leaders. Saive had been present in magazine Spirou since the early 1990s with editorial illustrations and short stories, but also with short-lived series like 'Les Maitres du Monde' (text by Janssens) and 'Michou Gropou' (text by Zidrou). But his best known series for the magazine became 'Les Poulets de Kentucky', that he started with 'Fondus' co-writer Hervé Richez in 2009. Album collections were published by Dupuis. For Bamboo, he additionally drew two books containing adaptations of sketches by French comedian Olivier de Benoist, in 2012 and 2013. In addition to his activities as an artist, Saive teamed up with Flemish artist Luc Cromheecke in 2001 to start CartoonBase, a company that serves as a syndication channel for various European artists. Text (c) Lambiek
Go to Olivier Saive's page
Remove from favorite artists  Add to favorite artists