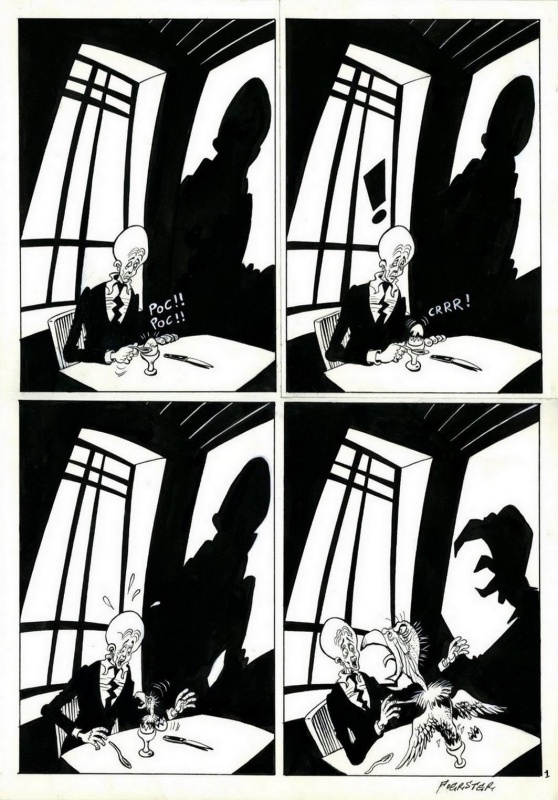 Philippe Foerster studied at the Institut Saint-Luc in Brussels, where he took courses from Claude Renard alongside Philippe Berthet, Andréas and Antonio Cossu. He worked for Le Neuvième Rêve in 1978 and 1979. At the same time, he created short stories of Tintin. He became one of the regular artists of Fluide Glacial in 1980. He wrote and drew short stories with a dark and fantastic sense of humor, that were later collected in the albums 'Certains l'Aiment Noir', 'Porte à Porte Malheur', 'La Raison du Plus Mort' and 'Tout Les Haricots Ont Une Fin'. He also created some longer stories, like a personal version of 'Pinocchio' at Magic Strip in 1982. He began the fantastic adventure series 'Starbuck' in Spirou in 1987. He co-founded Oro Production in 1993, and produced an album in collaboration with Antonio Cossu. He joined Revue magazine a year later, where he produced 'L'Île aux Rhidos' and 'Les Larmes du Cyclope'. As a scenarist, he wrote 'L'Oeil du Chasseur' for Philippe Berthet in 1988. In 1996, he teamed up with Andreas to create 'Le Styx' in the collection Signé at Lombard. For the same publisher, he started the series 'Silex Files' in the collection Troisième Degré in 2002.
Go to Philippe Foerster's page
Remove from favorite artists  Add to favorite artists
4 comments
To leave a comment on that piece, please log in