In Anaxagore 's collection
Back to gallery 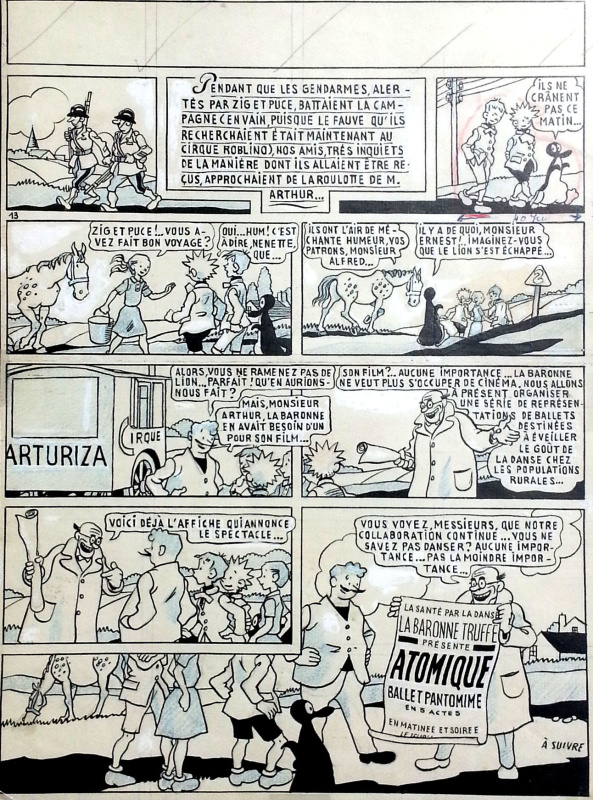 Alain Saint-Ogan, the son of a newspaper editor, started his career in 1913, when some of his drawings were published for the first time. He served in World War I, and became a cartoonist and newspaperman after his return. In 1925 he created the comics strip 'Zig et Puce', for the French weekly Dimanche Illustré. It was an instant success. This series featured also a penguin called Alfred, whose character became a popular mascotte, which was even taken by pilot Lindbergh in his famous plane Spirit of St-Louis, when he was the first to cross the Atlantic Ocean. "The Alfred" is now the most coveted prize given at the French Angoulême comics festival. In the 1950s, the series 'Zig et Puce' was taken over by Greg. Saint-Ogan continued with a number of other comic features, such as 'Mitou et Toti', 'Prosper l'Ours', 'Monsieur Poche' and 'Touitoui'. Apart from creating comics, Saint-Ogan wrote, illustrated and became the editor of children's magazine Benjamin in 1941. Saint-Ogan was also the main illustrator and editor-in-chief of the magazine Cadet-Revue, that appeared in the 1930s. Alain Saint-Ogan is widely recognized as the artist who gave a fresh impetus to French comics, introducing an art-deco-look which has inspired countless artists, including the famous Hergé. Text (c) Lambiek
Go to Alain Saint-Ogan's page
Remove from favorite artists  Add to favorite artists
3 comments
To leave a comment on that piece, please log in