In Duppie  's collection
Back to gallery Gilbert Gascard, who used the pseudonym Tibet, was one of the classic artists of Tintin magazine and creator of the famous series 'Chick Bill' and 'Ric Hochet'. Gascard was born in Marseille, France, but he moved to Belgium during his childhood. He began his career as an assistant animator in 1947. He then joined the studios of Tenas and Rali, where he met his future scenarist and collaborator André-Paul Duchâteau. The same year, he created his first continuing comic in Ons Volkske, 'De Avonturen van Koenraad', written by Duchâteau. In the same magazine, and its French counterpart Chez Nous Junior, he created the funny western comic 'Chick Bill'. In the early days of this series, all the characters were animals. As the series evolved, Tibet humanized his characters. From the fourth album, the series got its definitive shape. From 1956, the 'Chick Bill' series also appeared in Tintin. In addition, he created a sole episode of 'Pat Rick et Mass Tick' in 1955, as well as an advertising strip for Helva. He began his famous detective series 'Ric Hochet' the same year, again with Duchâteau, releasing 77 albums during his lifetime. Text (c) Lambiek
Go to Tibet's page 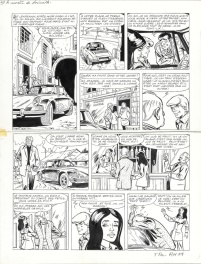 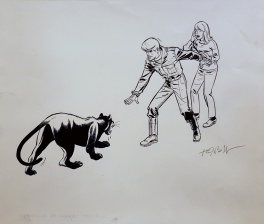 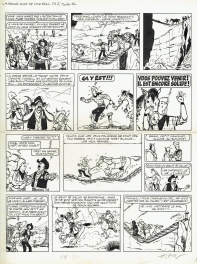