In comixfan  's collection
Back to gallery 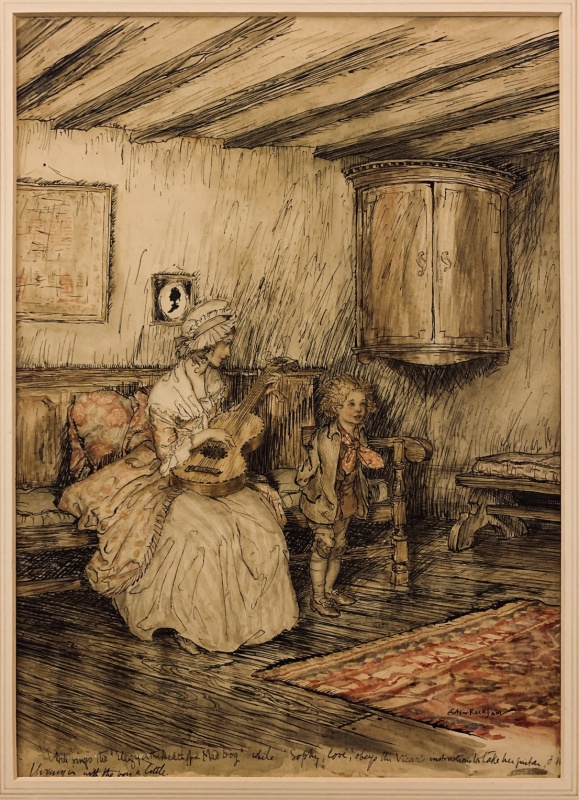 The Vicar of Wakefield by Arthur Rackham

Here is an original piece of art by Arthur Rackham that is finished inks and colors. It was created as a part of a series of illustrations done for a 1929 printing of the Vicar of Wakefield by Oliver Goldsmith. This illustration is finished but differs from the published piece in some subtle ways. I am not sure if it was a really detailed prelim or just a piece the artist or editor decided needed reworking. Regardless, I think it is a great example of Rackham's illustrative work and I am happy to add this to my collection. I found this at a comic art dealer's table at C2E2 of all places.

The caption at the bottom reads "Bill sings the 'Elegy of the Death of a Mad Dog' while 'Sophy, Love", obeys the Vicar's instructions to take her guitar, (3 words I can't make out) in with the boy a little." In the published version the caption reads "Bill signs "The Elegy of the Death of a Mad Dog". The poem referenced here is by Goldsmith as well about a dog that bites a man and everyone worries about the man passing away when in the end the dog dies. It is a satire as the man is not the good man they portray in the poem and the dog is not the bad dog they portray and in the end it is the poison of man that kills the dog instead of the dogs poison killing the man.


The book has an interesting history having been written in 1761-62 but not published until a few years later. The story goes that Goldsmith was a drunkard and behind on his rent and called a friend that he was in dire trouble. His friend came to find him being held hostage by his landlady for not paying rent. Goldsmith told his friend he had a finished manuscript and his friend took it to a publisher/book dealer and sold it for 60 pounds to get him out of trouble. The manuscript remained unpublished for a few years but was a huge success. It is also considered an important part of English literature as an example of a sentimental novel. It has seen some early silent film adaptations as well. It is not a book I'd heard of before nor the poem but I am uncultured and unsophisticated so no surprise there.
3 comments
To leave a comment on that piece, please log in