In Stefanomjr 's collection
Back to gallery 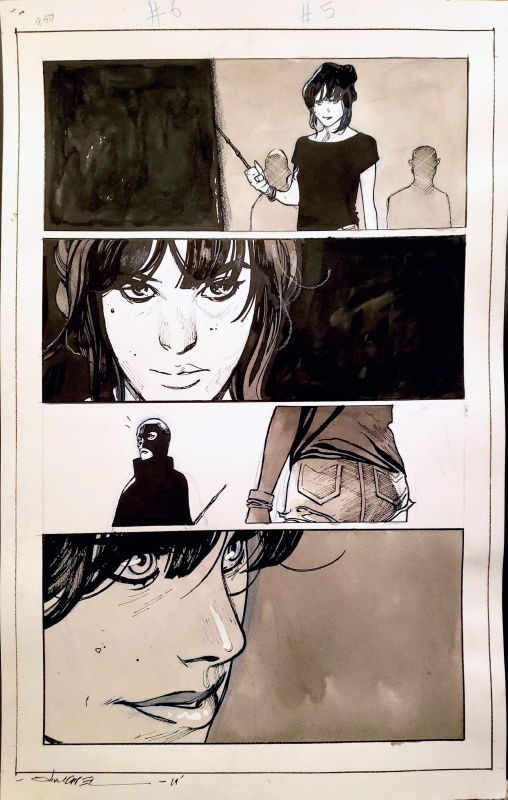 My favorite Image book of 2019. I love the world Millar and Coipel created and I especially love the character of a Cordelia.

Found myself at NYCC agonizing over which page to buy... The Magic Order book of original art was in very high demand at Kwan's booth and pages were selling like hotcakes.

Phil H was very helpful and patient with my indecision. In the end, unable to just pick one example, I bought two great Cordelia pages from the concluding issue.

This page has it all, every panel is Cordelia at her finest. Lady Albany is the best villain since Lord Vader and The Venetian is her Darth Maul... Cordelia finds herself trapped and woefully outnumbered.... or is she?

Olivier Coipel is a French comic book artist, known for his work on books such as House of M, Legion of Super-Heroes and Thor. Coipel came to prominence and significant controversy as the artist of the American DC Comics book Legion of Super-Heroes during the tenure of writers Dan Abnett and Andy Lanning.,[1] beginning with the "Legion of the Damned" story arc. Despite complaints about his art style by long-time Legion of Super-Heroes fans - who felt his style was "too rough and unrefined", leading to more than one prominent critic to refer to him as "Ol' Scratchy" - Coipel continued to draw the series when it was relaunched under the new title The Legion. Coipel signed an exclusive contract with Marvel Comics in January 2005. He was named in August 2005 as one of Marvel's "Young Guns," a group of artists that included Jim Cheung, David Finch, Trevor Hairsine, Adi Granov, and Steve McNiven, which according to Marvel Editor-in-Chief Joe Quesada, exhibited the qualities that make "a future superstar penciller."
Go to Olivier Coipel's page
Remove from favorite artists  Add to favorite artists
To leave a comment on that piece, please log in