In StormEmber 's collection
Back to gallery 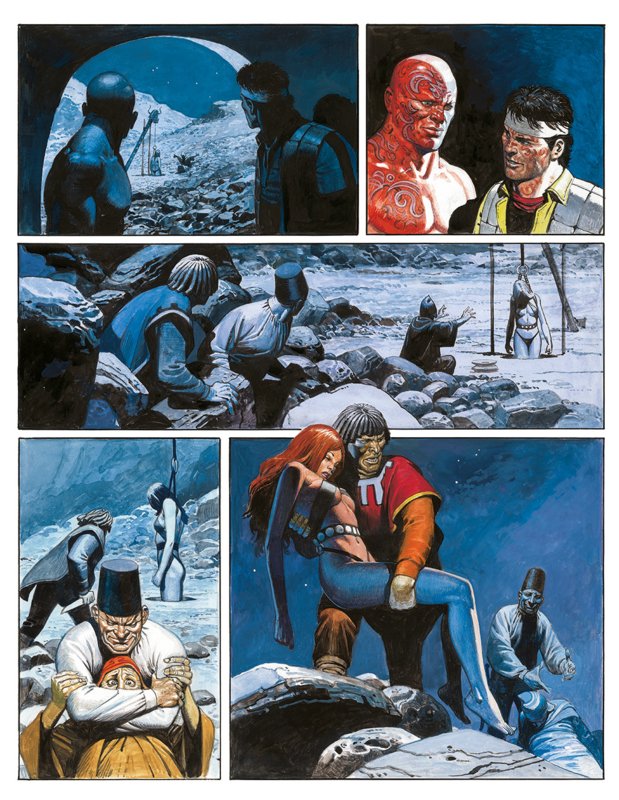 Page 27 of "The Hounds of Marduk", the 14th episode of the comic series "Storm" by Don Lawrence.

The still unconsious Ember is being cured from her drugged state with Pandarve's Breath, while the Shaman watches over her. Storm and Nomad understand there's nothing more they can do to help her, so they decide to go to sleep. But an unconscious woman hanging in the open being cured is an easy prey for an abduction.

A dream has come true, owning at least one original work of art by Don Lawrence. As Ember's abduction was the inspiration for a commission by Apri Kusbiantoro, it's good to own the original version as well.

Donald Southam Lawrence (17 November 1928 – 29 December 2003) was a British comic book artist and author. Lawrence is best known for his comic strips The Rise and Fall of the Trigan Empire in the British weeklies Ranger and Look and Learn and the Storm series, first published in the Dutch weekly Eppo (later relaunched as Sjors & Sjimmie) and subsequently in album form. Famous for his realistic and detailed style, he was an inspiration for later UK comic-book artists like Brian Bolland, Dave Gibbons and Chris Weston (indeed, Weston was taught by Lawrence).
Go to Don Lawrence's page
Remove from favorite artists  Add to favorite artists
5 comments
To leave a comment on that piece, please log in