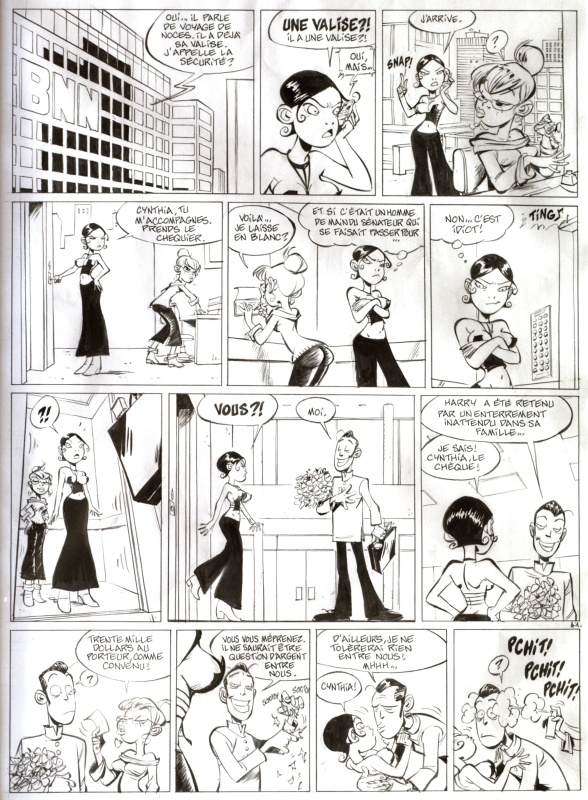 Simon Léturgie started his career drawing some short stories for Spirou, using the pseudonym Slet. Then, together with his father, the comics writer Jean Léturgie, he launched Eigrutel Productions, through which they published their subsequent projects. Father and son began their collaboration with a series of oblong booklets about cinema producer 'John Eigrutel', and with the futuristic 'Polstar' series. They created the weekly series 'Tékila' for L'Echo du Centre, that was also collected in three oblong format booklets by Eigrutel. Their bext big project was the biting series about NYPD officers 'Spoon & White', co-scripted by Yann and eventually co-drawn by Franck Isard and published by Dupuis (1999-2002) and then Vents d'Ouest (from 2003). Also for Vents d'Ouest father and son co-wrote the humorous adventure series 'Outre Tombe' for Richard di Martino between 2004 and 2006. Since 2005 Simon Léturgie participates in the collection 'Commedia' for Vents d'Ouest, for which he adapts several Molière plays to the comics format. He has also worked with Yann on the 'Spirou Dream Team' gag series, that is published in Spirou magazine since 2008. In 2011 Simon, in cooperation with Yann and his father, launched 'Gastoon' with Marsu Productions, a gag series starring Gaston Lagaffe's little nephew. Text (c) Lambiek
Go to Simon Léturgie's page
Remove from favorite artists  Add to favorite artists