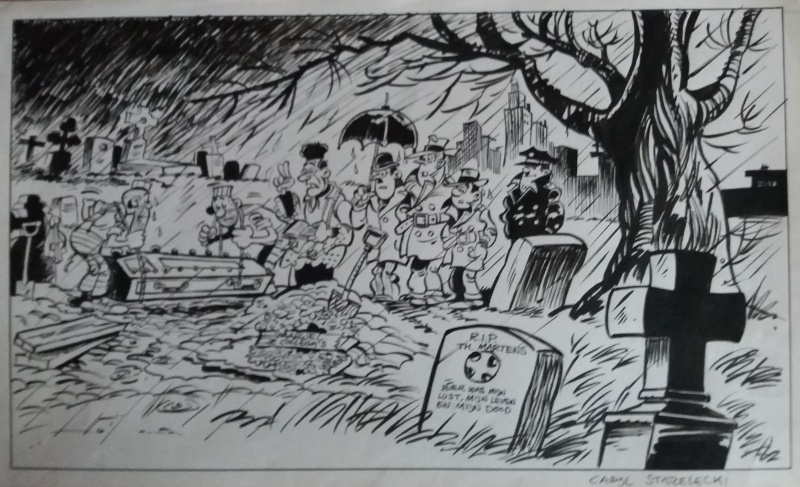 Caryl Strzelecki is a Flemish comic artist, cartoonist, illustrator and advertising artist. He was born in Koersel as the son of a Polish father and a Dutch mother in 1960. He has lived in Lommel since 1971, and he studied at the Graphic School in Eindhoven. He published his first comic stories in local magazines like De Nete and Publiflash. He regularly contributed to the bi-weekly family magazine Jet in the period 1981-1983, and in 1982, he created the weekly comic 'Oebel en Isabel' for Top-Magazine. In 1984, he cooperated with Raoul Cauvin on the series 'De Lolympische Spelen' in Robbedoes, the Dutch equivalent of Spirou. Caryl Strzelecki spent the 1990s working mainly for advertising agencies. He returned to the field in 2000 with the remarkable comic story 'De Koffer', which was written by cult novelist Herman Brusselmans. As a children's book illustrator, he is mainly known for his collaborations with writer Leander Hanssen. He also made a great many "graphic poems", based on poems by Charles Bukowski. In 2011, he published the graphic novel 'De kleuren van het getto', about the Warsaw ghetto, in cooperation with writer Aline Sax. The English edition was awarded the National Jewish Book Award and the Sydney Taylor Book Award. Caryl's next graphic novel was published in 2013. It was a collaboration with Rudi Vranckx and called 'De gierenclub'. Text (c) Lambiek
Go to Caryl Strzelecki's page
Remove from favorite artists  Add to favorite artists