In juthisylv 's collection
Back to gallery 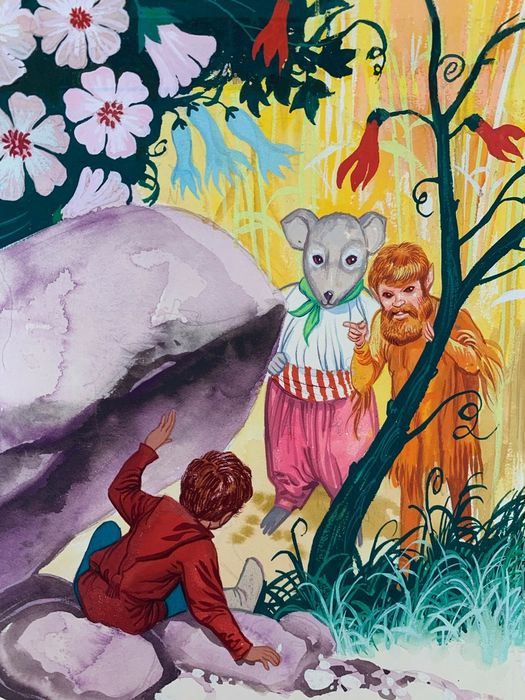 Once Upon a Time Fairy Tales

An original gouache illustration by Gerry Embleton. An individual gouache painting, used in Once Upon a Time during the 1960s.

A few small marks, pencil markings by the artist / ink splats. The right margin has some old glue residue and torn to margin - not effecting the image, but the colours very bright. Please see images for further description. On paper, laid on board.

Gerry Embleton is a British artist, born in London. He is the brother of Ron Embleton. Some of his best early work appeared in Zip, where he took over the 'Strongbow the Mighty' strip in 1958, and Cowboy Picture Library where he drew Davy Crockett, Kit Carson and Kansas Kid (1959-62). In the 1970s, Embleton concentrated on illustrating books and became noted for the historical accuracy of his military illustrations, although he also illustrated fairy tales and histories of the American West. He briefly returned to comics to draw 'Dan Dare' for the revived Eagle in 1982.

Gerry Embleton began as a comic strip artist, and worked on TV Century 21 in the 1960s. He later began working in children's educational illustrations and then advertising. He also paints landscapes and was the first artist to work on the new Dan Dare in 1982. In 1983, he moved to Switzerland. He lives in Prêles near Neuchâtel. He is now best known as an illustrator of military and historic subjects. He has illustrated more than 40 titles for the military publisher Osprey. In 1998, he founded a company called Time Machine that works with museums all over the world, specializing in vivid displays with 3D figurines. Gerry Embleton is a founding member of the Company of Saynt George, a living-history association. His book "The Medieval Soldier", co-authored with Tolkien illustrator John Howe, had a big influence on the living-history hobby as a whole. He is the brother of Ron Embleton.
Go to Gerry Embleton's page
Remove from favorite artists  Add to favorite artists
To leave a comment on that piece, please log in

Under attack by natives