In LL 's collection
Back to gallery 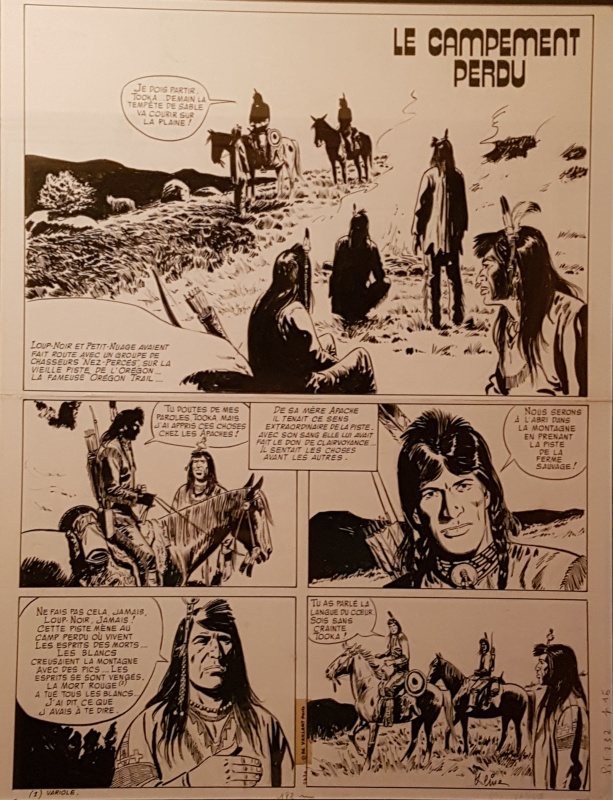 Roger Chevallier, better known as Kline, was a successful post-war artist in the realistic genre. Although at first inspired by American artists like Milton Caniff and Noël Sickles, he soon developed his own, personal style. After studying Fine Arts in Rouen, he became a letterer for imported comics by Cino Del Duca. Shortly afterwards, from 1945 to 1947, he created several stories for the S.A.E.T.L. in publications like Sélections de Corsaire He was additionally active for the publishers Marcel Daubin ('Le Chevalier Jehan' in Collection Vaillance), Pic et For-Ever ('Alain le Flibustier' in Pic Adventures) and M.V. ('Bob l'Ardent'). Until 1948, he drew 'Kaza le Martien' for O.K.. In that same year, Kline began a collaboration with the S.P.E. where he created many comics for the magazine Fillette A year later, he was also present in Coq Hardi, with 'Roland, Prince des Bois' and 'Colonel X' (with Marijac), as well as illustrations for text stories by Maurice Limat. In 1960 he commenced working for Vaillant, where he drew series like 'Davy Crockett' (until 1969) and 'Loup-Noir' (1969-1980), both written by Jean Ollivier. In the 1980s and the early 1990s, Kline was making (commissioned) historical albums for the publishers I.D.P. Text (c) Lambiek
Go to Kline's page
Remove from favorite artists  Add to favorite artists
1 comment
To leave a comment on that piece, please log in