In TontonCalou  's collection
Back to gallery 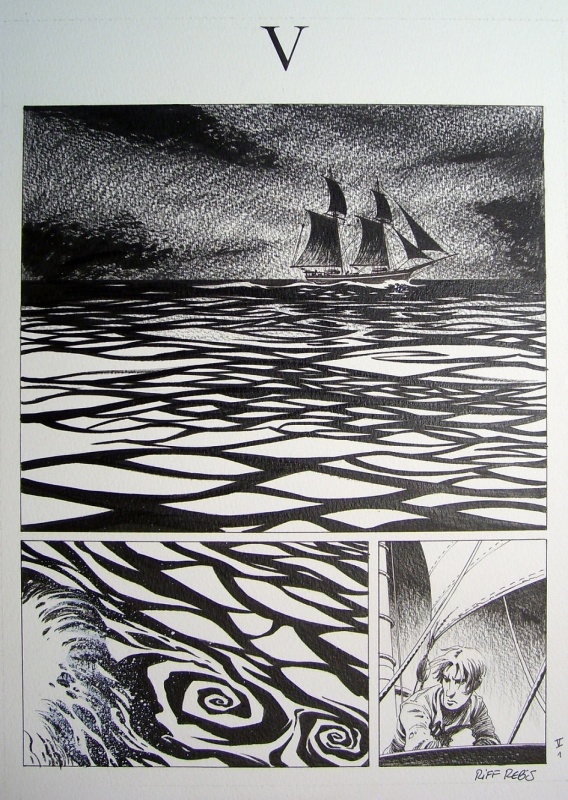 Riff Reb's, whose real name is Dominique Duprez, was born in Algeria, but moved to France during his childhood. In 1983, he collaborated on a collective album, 'Neuvième Cauchemar' and in that same year, he started an education in Decorative Arts. A year later, he founded the Asylum studios, where he was soon joined by fellow artists like Édith, Kisler, Cromwell, Ralph, Gonnort, Joe Ruffner and Karim. Together, these artists worked on 'Les Mondes Engloutis' ('Spartakus and the Sun Beneath the Sea'), an animation series, which was adapted into comics format at the same time for Casterman (1985-1986). For Albin Michel, he created the series 'Glam et Comet' in 2005 with Abuli, who was replaced by Corcal for the second book in 2007. New creations include the adaptation of Pierre Mac Orlan's satirical pirate book 'À bord de l'Étoile Matutine' for Soleil in 2009, which was followed by more stories from the sea in his series 'Le Loup des Mers' from 2012. In addition, he made the fairytale 'La Carotte aux Étoiles' with Régis Lejonc for Éditions de la Gouttiére in 2010. With his dynamic graphics, Riff Reb's has established himself as one of the founding fathers of a new school of comic artists.
Go to Riff Reb's's page
Remove from favorite artists  Add to favorite artists