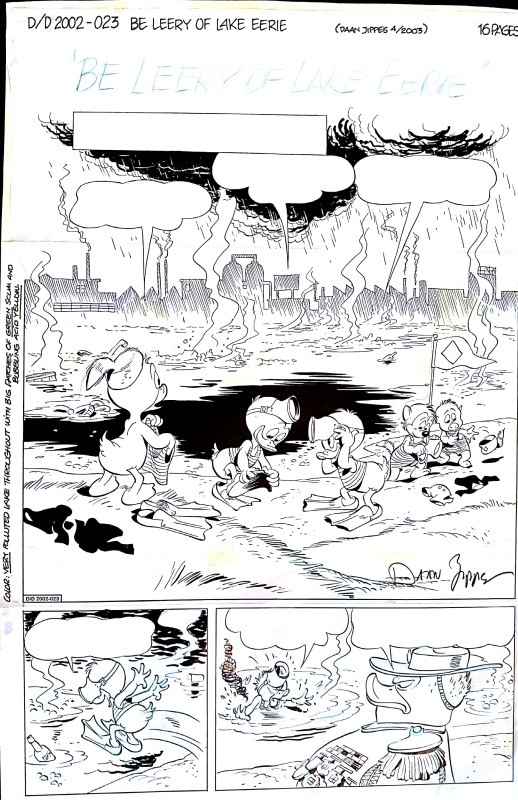 Daan Jippes has been the undisputed master of recreating and imitating Carl Barks´ style since the 1970s.Recently, he has re-inked all the stories Barks only pencilled from 1966 to 1974.
This page is his inked version of the first page of Junior Woodchucks 17, Be Leery of Lake Eerie. First published in Scandinavia in 2003. Barks´ pencil sketches were originally inked by Kay Wright and published in the US in 1972. Compare Barks´ pencilled page.
#diving

Daan Jippes is considered as one of Holland's best comic book artists, and one of the few who has gained international fame. He is mainly noted for his work on Disney comics, especially for his ability to work in a near-mint copy of Carl Barks' style. After training most of the original artists of the Dutch Disney comics production in the 1970s, he has even worked for the Walt Disney Company in the USA, and then became a leading artist for the Danish Disney publisher Egmont. As a true comics chameleon, Jippes can easily adopt the drawing style of other artists, including such giants as André Franquin, Floyd Gottfredson, Morris and Albert Uderzo. From his cover illustrations with classic Franco-Belgian comics characters for Pep magazine in the 1960s to his adaptation of Jan Kruis' personal drawing style to a standard for the studio production of 'Jan, Jans en de Kinderen' in 1999, most of his work was done anonymously. Therefore, Daan Jippes didn't become a household name among the general public like his contemporaries Martin Lodewijk and Dick Matena. In fact, for many years his only personal comic was the influential one-shot album 'Twee voor Thee', which established his image of an "artist's artist". Text (c) Lambiek
Go to Daan Jippes's page
Remove from favorite artists  Add to favorite artists