In robpistella 's collection
Back to gallery 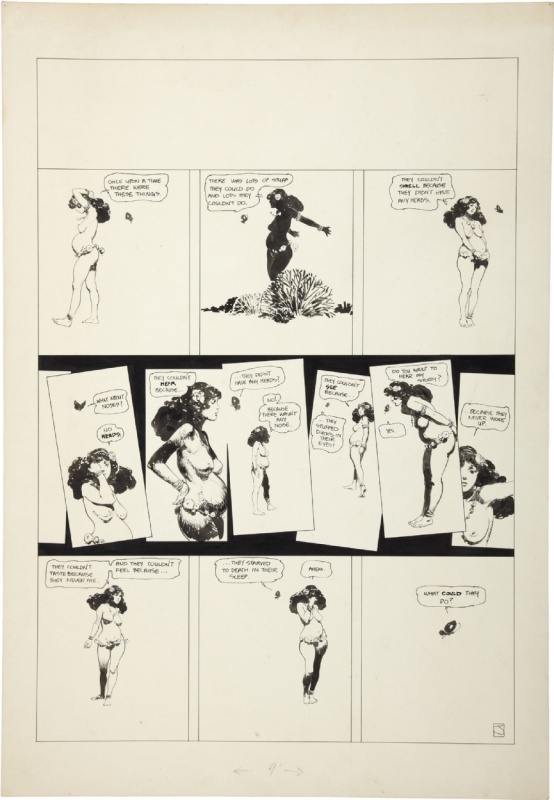 I love the 'sparseness' of this piece, Jones always knew how to balance white and black, positive and negative space. I think this is PERFECT. This one also illustrates how much of an influence George Herriman and Krazy Kat were on Jeffrey's ideas on layout of a black and white strip.

In 1972, Jeff Jones began his long running comic 'Idyl', which ran in every issue of the National Lampoon until August 1975. 'Idyl' is a romantic, poetic collection of words, which sometimes confuses the reader who has already fallen for his delicious pen work. In 1975, Jones founded the Studio together with Berni Wrightson, Barry Windsor-Smith and Michael Kaluta. There they produced posters, portfolios and illustrations for different publishers. In 1979, Dragon Dreams published the book, 'The Studio', which was devoted to the group's work. By the early 1980s he had a recurring strip in Heavy Metal titled 'I'm Age'. Jones' own work was reproduced in 'Yesterday's Lily' (Dragon Dreams 1980), which collects a number of his book covers, and 'Age of Innocence' (Underwood Books 1994) with his more romantic works. Jones had always felt he wanted to be a woman, and by 1998 he began hormone replacement therapy. After a period of personal problems, she started producing work again in 2004. Suffering from poor health, Jeffrey Catherine Jones passed away in May 2011.
Go to Jeff Jones's page
Remove from favorite artists  Add to favorite artists
5 comments
To leave a comment on that piece, please log in

I Bled The Sea by Jeffrey Jones

"We know who we are" de Robert Silverberg par Jeffrey Jones

Vampirella #5 - An Axe To Grind by Jeffrey Jones.