In oscarls1 's collection
Back to gallery 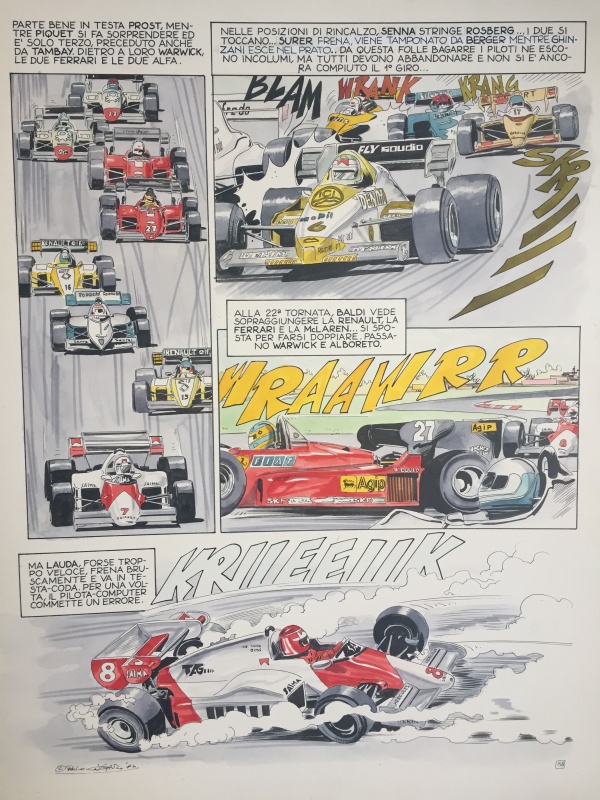 Paolo Ongaro entered the comics field in 1964, inking work of Vladimiro Missaglia. Soon, he started out on his own, illustrating some stories for Horror, written by Pierre Carpi. In 1970 he expanded his activities and illustrated some episodes of 'Diabolik' and comics for Il Monello, L'Intrepido, Il Giornalino, Il Corriere dei Ragazzi, SuperGulp and Collana Eroica. In the second half of the 1970s, he drew among others 'Tarzan' for Cenisio, as well as war stories for the Fleetway agency in London and 'Agente Speciale Magnum for Mondadori's Audax. In 1976-1977 he did espionnage stories for Mondadori in Secret, and comics for Uomini e Guerra and Superoica at the publishing house Dardo. Also for Dardo, he created the series 'Nuova Frontiera' in Corrier Boy. He wrote and drew 'L'Immortale' from 1977 and 1979, and cooperated on Enzo Biagi's 'Storia d'Italia a Fumetti'. In the 1980s, Ongaro drew the sports series 'Azzurro' in Il Gazzettino and Guerin Sportivo. He was present on the French market with contributions to the historical comics collections of Larouse, as well as stories for L'Écho des Savanes and Pif. With text writer Andrea Mantella, he drew 'Old America' in LancioStory, as well as 'Woody Snow' in Corrier Boy. He took on a wide variety of sports comics for Guerrin Sportivo, Il Giorno, Tuttosport and Topolino Sport ('Boy Goal'). Text (c) Lambiek
Go to Paolo Ongaro's page
Remove from favorite artists  Add to favorite artists