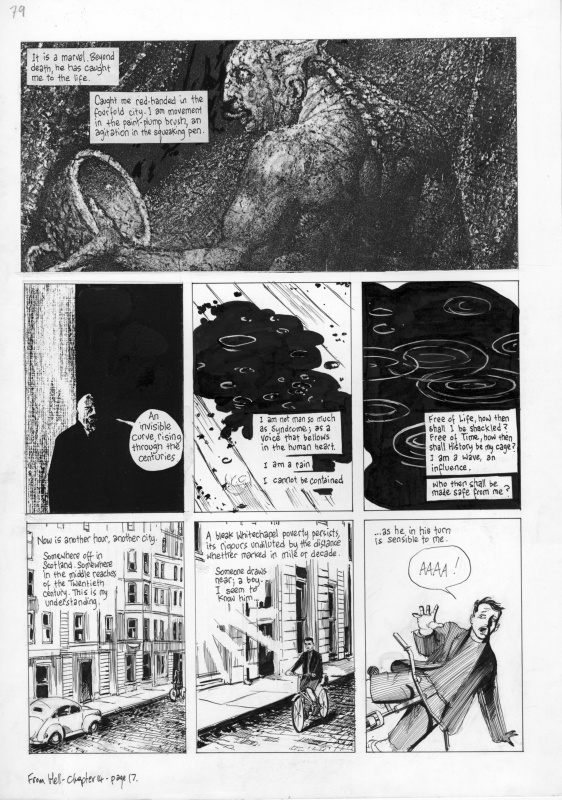 The first panel in this page depicts parts of William Blake´s painting "Ghost of a Flea". The same panel was used in Ch. 9 page 15. Eddie Campbell cut it off from that page and used it again here. The painting, one of Blake´s most famous, apparently shows the ghastly soul of a murderer. Alan Moore explains the significance for From Hell in an article in The Guardian newspaper 30.08.2019, written in connection with an upcoming Blake Exhibition in Tate Gallery:
"As imagined by the Lambeth angel whisperer, the threatening and somehow smug abomination is theatrical in its demeanour, consciously performing for the viewer. Glossed by Blake, the flea is the transposed soul of a murderer trapped in a form that, while both bloodthirsty and powerful, is too small to become a mighty engine of destruction. Thus condemned, it struts its miniature domain and makes a swaggering display of cruelties that it can no longer accomplish. With nothing save an acorn cap to represent its drinking bowl of blood, with nothing but a thorn to serve as improvised prison yard shiv, this former demon is demoted and no longer dangerous. In its fallen state, more mischievous than malefic now, the has-been homicidal maniac is almost poignant.

Framed by threadbare curtains with a plunging star upon its painted backdrop, something in the monster’s owl-like stare and heavy posture led me to recruit it as a premonition of Sir William Withey Gull, the posited Jack the Ripper in From Hell, my work with Eddie Campbell."

Eddie Campbell (born 10 August 1955) is a Scottish comics artist and cartoonist who now lives in Australia. Probably best known as the illustrator and publisher of From Hell (written by Alan Moore), Campbell is also the creator of the semi-autobiographical Alec stories collected in Alec: The Years Have Pants, and Bacchus (aka Deadface), a wry adventure series about the few Greek gods who have survived to the present day. His graphic novel The Lovely Horrible Stuff, which playfully investigates our relationship with money, was published in July 2012 by Top Shelf Productions. His scratchy pen-and-ink style is influenced by the impressionists, illustrators of the age of "liberated penmanship" such as Phil May, Charles Dana Gibson, John Leech and George du Maurier, and cartoonists Milton Caniff and Frank Frazetta (particularly his Johnny Comet strip). His writing has been compared to that of Jack Kerouac and Henry Miller.
Go to Eddie Campbell's page
Remove from favorite artists  Add to favorite artists
2 comments
To leave a comment on that piece, please log in