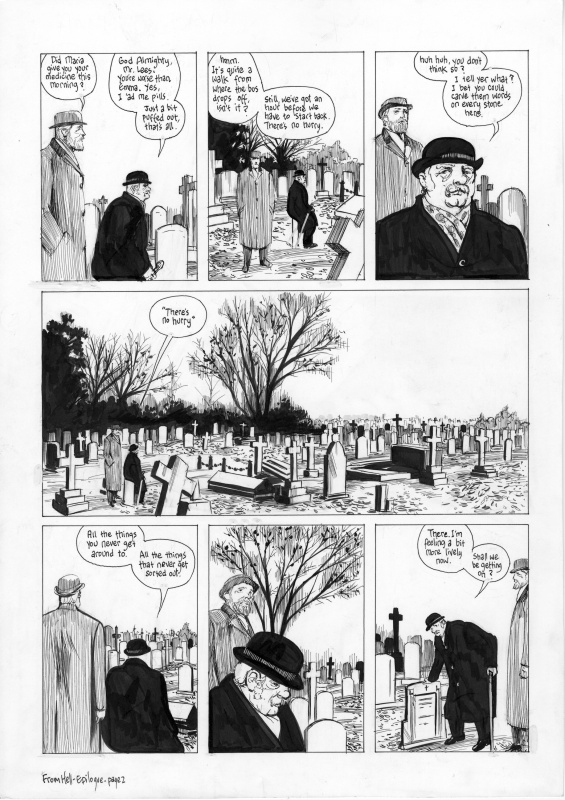 This page is known as The Invisible Fred Abberline page. In the lower left panel, Eddie Campbell forgot to ink Inspector Abberline´s head. The pencils were erased, and no one noticed anything until after the first edition of the From Hell epilogue had been published. Alan Moore made a comment on this episode in Cerebus 217 (later reprinted on Campbell´s blog and in his From Hell Companion):

"On the matter of what has been viewed in some quarters as an untoward wordiness in my panel descriptions, might I draw your attention to the final volume of From Hell, specifically to page two, panel five of our epilogue, The Old Men On The Shore. In the script description for this panel I unfortunately allowed myself a moment of laxity and omitted the words "INSPECTOR ABBERLINE’S HEAD IS STILL ON HIS SHOULDERS DURING THIS PANEL. IT HAS NOT RETREATED TORTOISE-LIKE INTO HIS NECK, NOR HAS IT IN SOME FASHION MANAGED TO REFRACT LIGHT AROUND IT LIKE A KLINGON SPACESHIP SO THAT THE INSPECTOR RESEMBLES SOMETHING OUT OF MAGRITTE WITH HIS BOWLER FLOATING THERE SUSPENDED ABOVE THE EMPTY COLLAR OF HIS COAT." Last time I’ll make that mistake, obviously."

The head was duly inked in later editions, but on the original page Abberline is still headless.