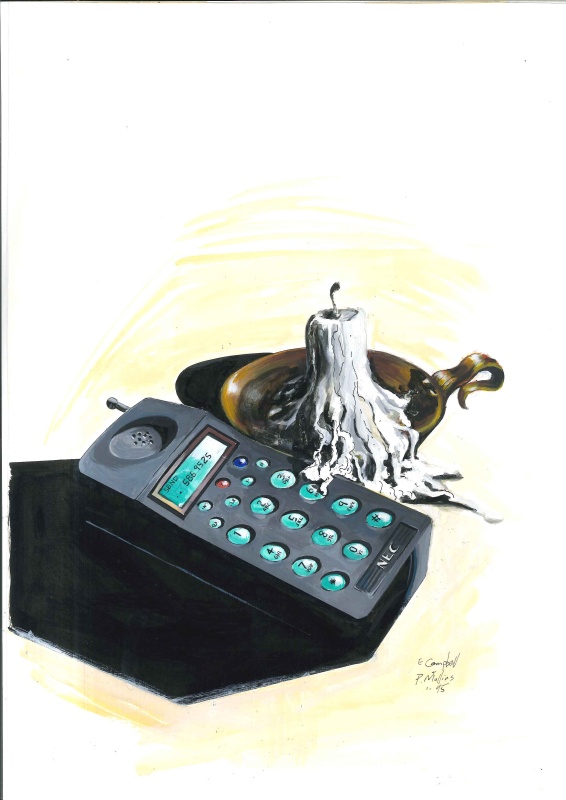 This is the cover for From Hell book 7, published in the USA by Kitchen Sink in 1995. The content of this book is in its entirety Chapter 10 - the chapter where Sir William Gull kills his last victim on the first page and then go on to dissect and mutilate the body page after page after page. This chapter is arguably one of the most intense, horrifying and brutal graphic sequences in the history of comics.
So what do you choose to illustrate a horror like this on the cover?
Why, a candle and a cellphone of course.

The candle is fairly explicable: A burning candle by Mary Kelly´s bed is necessary for the killer and mutilator to do his work. The cellphone? It seems rather bizarre in this context, but it is a vital part of Gull´s visions of the future during the dissections. In his deranged mind, he releases the new century with his killings. But the late 20th century he imagines in visionary flashes is in its way as horrific for him as his killings and mutilations are for us: People walking around in offices like automations, playing with their toys, carrying and talking into strange things, obsessed with numbers.
The numbers on the cellphone are, according to Eddie Campbell, Kitchen Sink´s phone number in 1995. They either didn´t recognize it or they accepted it as an in-joke.