In Sanderg 's collection
Back to gallery 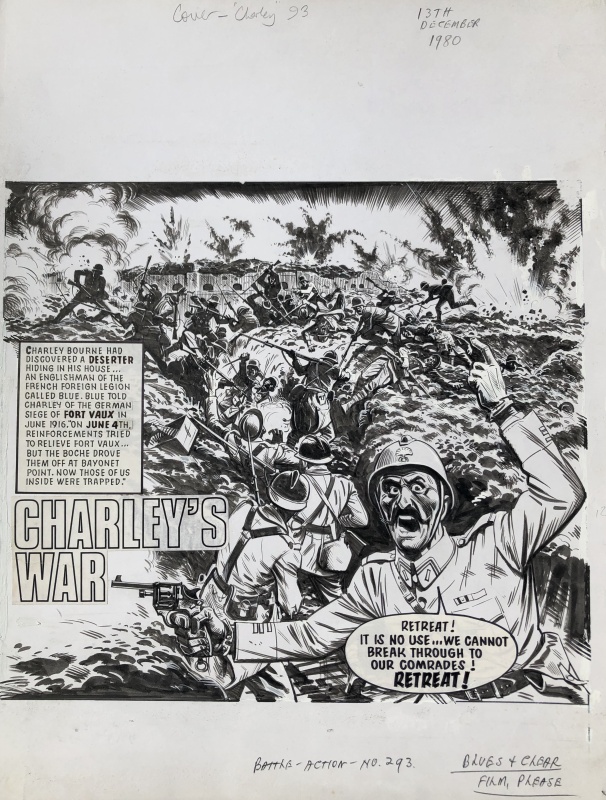 I am truly thrilled to have been able to acquire an original cover of the incredible Charley’s war series.

Being a historian with a particular interest in World War One, I have been looking for an original piece of art of the amazing Joe Colquhoun for a long time. Original pieces of the Charley’s war series however are very rare at the market.

The cover depicts an fruitless attempt by French reinforcement troops to relieve the defense forces at Fort Vaux during the battle of Verdun.

In the series, Charley meets a deserter, an Englishman of the French foreign legion called blue who was part of the defense forces of the fort. When he tells Charley his story, this begins with the moment that the defense forces have to depend on themselves since, unfortunately, their comrades can not relieve them due to heavy German resistance.

The defence of Fort Vaux was marked by the heroism and endurance of the garrison, including Major Sylvain-Eugene Raynal. Under his command, the French garrison repulsed German assaults, including fighting underground from barricades inside the corridors, during the first big engagement inside a fort during the First World War. The last men of the French garrison gave up after running out of water (some of which was poisoned), ammunition, medical supplies and food.

Although World War One happed more than 100 years ago already it is most important that the rememberance is being kept.

Charley’s war does this in a most impressive way and is therefore, to my opinion, one of the best anti war comics ever made. It is, to my opinion, on the same level as Tardi’s ‘it was the war of the trenches’.

After attending art school, Joe Colquhoun enlisted in the Navy in 1943 and returned to art college in 1947. He joined the King-Ganteaume Studios, through which he produced work for various independent comics. He began a collaboration with Amalgamated Press in 1952. After a story published in Lion, he drew the long-running series 'Legionnaire Terry's Desert Quest', followed by 'Biff Benbow' and 'Wildfire', for The Champion. In September 1954, Colquhoun became the artist of 'Roy of the Rovers' on the frontpage of the new comic, Tiger. After the fourth strip Colquhoun took over scripting and continued it until 1959. Afterwards, he moved to Lion Comic to draw the adventures of 'Paddy Payne', a World War II fighter pilot. Many series followed in the 1960s, such as 'Saber, King of the Jungle', 'Football Family Robinson' (in JAG, 1968), 'Soldier Sharp, the Rat of the Rifles' (in Valiant, 1976), 'Adam Eterno' and 'Kid Chameleon'. Colquhoun most popular series was however 'Charley's War', that he made with writer Pat Mills about a soldier serving in World War I. The strip appeared in Battle from 1978, as did his other series, 'Johnny Red'. Joseph William Colquhoun retired from full-time comic drawing in 1986, but died of a heart attack shortly thereafter on April 13, 1987. Text (c) Lambiek
Go to Joe Colquhoun's page 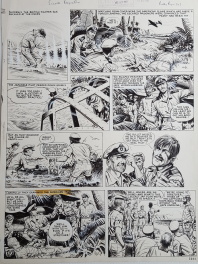 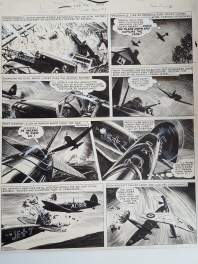 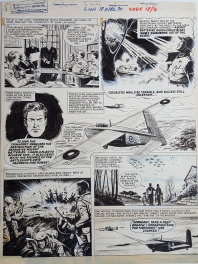