In zyxon 's collection
Back to gallery 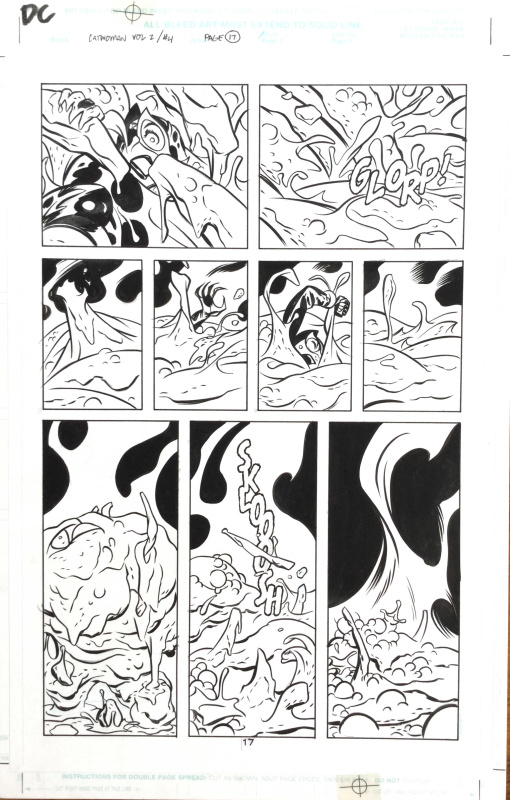 Volume 2, Issue 4, Pages 17
In combination with page 18 this is a nice, nearly abstract Dyptich of one of the masters of comic art with beautiful inks by Mike Allred.

Out of an interview with Ed Brubaker about the start of the Catwoman project with Darwyn Cooke, who was actually already working on his "DC:New Frontier"-project: "We were looking around for an artist, and Matt sent me xeroxes of the first 20 pages of Darwyn Cooke‘s Batman: Ego. I said, “If we could just get this guy, that would be amazing,” and Matt said, “He’s got this big Justice League project that he’s been working on, so I doubt we’ll get him,” and that was New Frontier. Then it turned out Cameron Stewart, who was inking Deadenders, actually shared a studio with Darwyn and Chip Zdarsky and a few other guys. So at Comic-Con, Cameron introduced me to Darwyn, and I told him, “Hey, I’m taking over Catwoman, and I have permission to redesign her costume.” Hoping that would lure him, that chance to redesign and redefine a classic character. So we got talking about the idea of revamping Catwoman, and that he would only have to stay for the first storyline, because there was some delay on New Frontier, so he just barely had room in his schedule to pencil these four issues. At that point it was just going to be Catwoman #82, but when he sent in pencils to DC, we were suddenly getting phone calls. Everyone was going crazy for it, and they had to cancel Catwoman and reboot it with a new #1. They wanted to push it back six months and have us do backup stories in Detective that would lead into it, and they were going to have the person who was doing Catwoman rewrite their final issue so that it ended looking like she was dead. I remember being worried Darwyn was going to quit because the book was being pushed back and that might mess up his schedule. I knew he had New Frontier coming up, and that was going to be his priority as soon as he was done penciling Catwoman, because he was writing, drawing all of it. So I got on the phone with Darwyn, and he was actually psyched about it.

Darwyn Cooke was a Canadian comic book artist and animator, known for his notable work on several DC titles, and for his adaptations of Donald Westlake's 'Parker' novels for IDW. Born in Toronto, he published his first comics in New Talent Showcase in 1985. He subsequently worked as a magazine art director, graphic and product designer for 15 years.
Go to Darwyn Cooke's page
Remove from favorite artists  Add to favorite artists
To leave a comment on that piece, please log in

Parker . The Man with the Gateway Face .