In VINBLOOD  's collection
Back to gallery 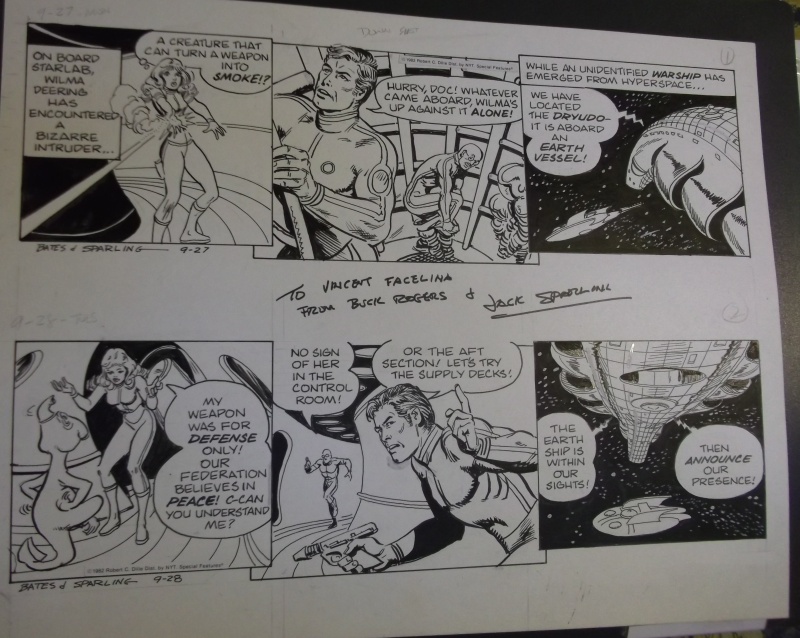 John Edmond Sparling got his artistic education at the Arts and Crafts Club in New Orleans, and the Corcoran School of Art. After doing gag cartoons for the editorial page of the New Orleans Item-Tribune, he created the comic strip about the reporter 'Hap Hopper, Washington Correspondent' with writers Drew Pearson and Robert S. Allen in 1939. He drew the strip until 1943, when he was succeeded by Al Plastino. Sparling has several credits with the Parents' Magazine Press, including 'Real Heroes', 'Judy Wing', 'Betty Fairfield', 'Jack Armstrong' and 'Pug and Curly'. In the 1940s, he worked on comic books by Lev Gleason (romance) and Fawcett ('Nyoka'), and did various promotional comics, among others for the American Gas Association and the steel industry. He also did a new syndicated comic, called 'Claire Voyant' (1943-48). In the 1950s, he worked for companies like Harvey, Toby Press, Charlton and Ziff Davis, doing western, horror and romance titles. He also did syndicated strips. In the late 1960s, Sparling was additionally present in Eerie with several horror stories. From 1960 to 1972, he did the daily 'Honor Eden' for the McClure Syndicate. Jack Sparling remained active until the late 1980s. In the final stages of his comic book career, he worked mainly on Western Publishing titles like 'The Twilight Zone' and 'Turok', but he also did contributions to DC and Marvel titles
Go to Jack Sparling's page
Remove from favorite artists  Add to favorite artists
1 comment
To leave a comment on that piece, please log in