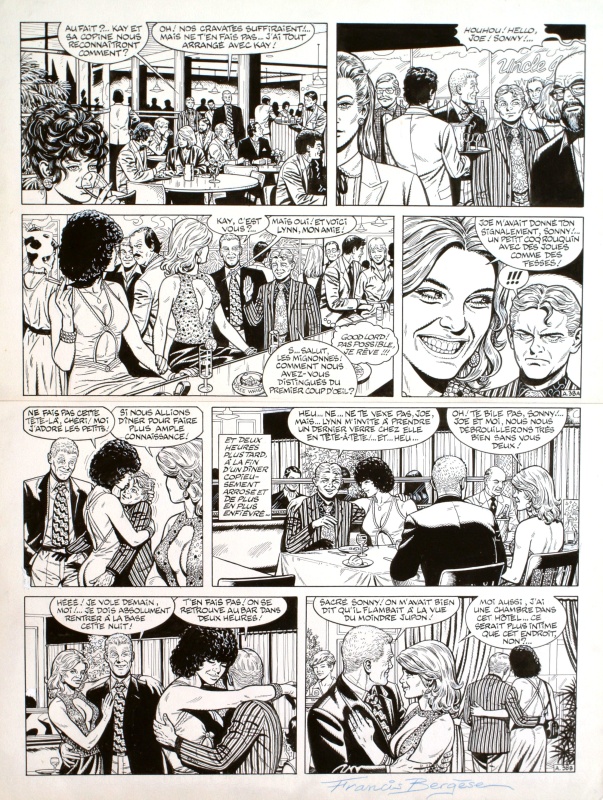 At a very early age, Francis Bergèse was already fascinated by airplanes, and he obtained a flying licence at the incredibly young age of seventeen. His first work appeared in the monthly L'Étoile in 1963. He then drew his first complete stories in J2 Jeunes between 1964 and 1966. Then, through a press agency, he produced hundreds of pages for the magazines Zorro ('Jacques Renne', his first aviation comic), Amigo, Ajax, Cap 7 and Signe de Piste. He also made 'Les 3 Cascadeurs', 'Les 3 A' and 'Michel dans la Course' in Cyclomoto between 1969 and 1971, while also making some parodies in Télé-magazine and contributions to Francs-Jeux. In the early 1980s, he did some comics about World War II for Larousse and Ouest-France, but his big breakthrough came in 1983, when he was assigned to continue the 'Buck Danny' series after the death of Victor Hubinon. After the death of the original scriptwriter Jean-Michel Charlier, Bergèse made one story in cooperation with Jacques De Douhet, but eventually took on the scriptwriting himself. From 1990 to 1994, Bergèse also made some 'Biggles' adaptations. Today, Bergèse is considered the leading artist in the field of aviation comics and illustration. Bergèse made his final 'Buck Danny' story in 2008. Text (c) Lambiek
Go to Francis Bergèse's page
Remove from favorite artists  Add to favorite artists