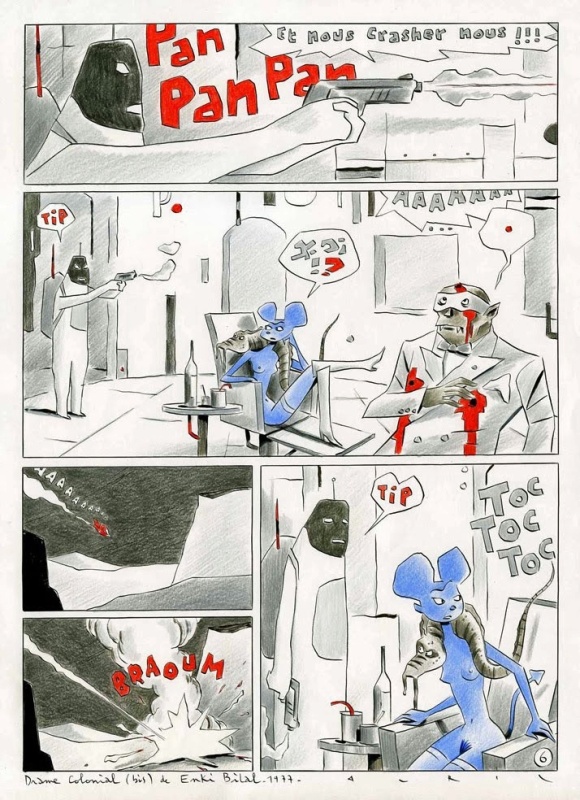 After attending college at the Académie Röderer, François Avril published his first work in the fanzine Band' à part. It didn't take long before his economic graphic style made him sought after by various publishers and agencies. The same goes for the other artists of the so-called "École Pigalle" ("Pigalle School," named after the Paris neighborhood), a term that was reportedly coined by Avril. The most distinctive feature of the Pigalle-based artists of the mid-eighties, like Avril, Loustal, Benoît, Dupuy, Berbérian and Petit-Roulet, is that they all operate on the boundaries between graphic art, comics and publicity. Also they share the same tastes, like a preference for contemporary variants of the Hergé-like 'clear line' style, and friendships. Some of the most distinctive comics by Avril are 'Doppelgänger SA', the humorous series 'Pierrot Blouchon et Tom de Savoie' (under pseudonym: Tex Avril), 'Soirs de Paris' (with Petit-Roulet), 'El Rebelde, le Rebelle' (with Cabry) and 'Le Chemin des Trois-Places' (with Jean-Claude Götting). With Alain Lachartre, he directed the advertising cartoon 'Monsters of Space' for Malabar chewing gum in 1986. Text (c) Lambiek
Go to François Avril's page
Remove from favorite artists  Add to favorite artists