In DersouOuzala 's collection
Back to gallery 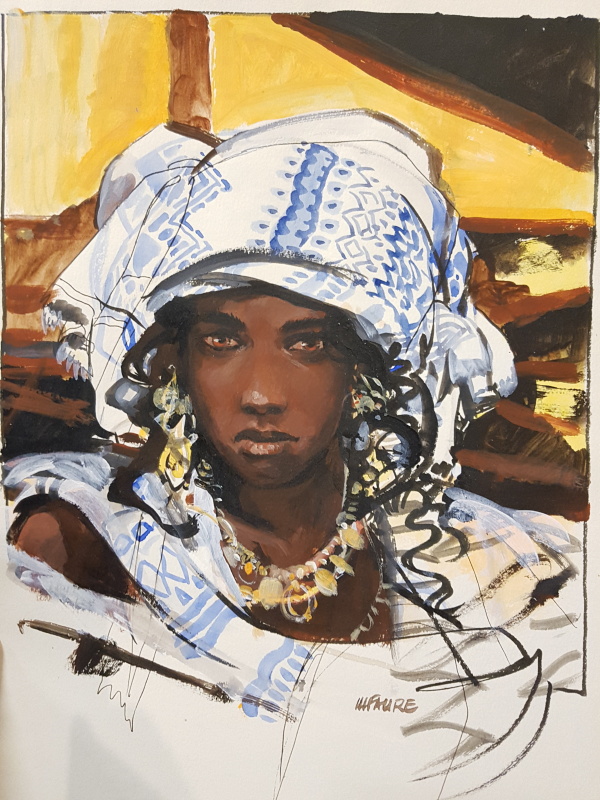 After his artistic studies, Michel Faure was sent to Madagascar for his military service. He stayed there for ten years, and published his first comic, 'Héry' in 1975. As a freelancer, he provided several illustrations and comic pages with scripts by Daniel Vaxelaire to Télé 7 Jours. His weekly comic, called 'Aventures dans l'Océan Indien', was collected in albums by Arts Graphiques Modernes in 1978 and 1979. After discovering the work of Frank Frazetta, Faure drew 'Adam ou la Colère de Dieu', later published by Glénat under the name 'Dieu, sa Fille et l'Homme'. For this same publisher, he produced 'Moïse' in 1983. Faure then joined a team of under water archeologists, which inspired him to make 'John Bowen' and 'Captain Avery', two pirate comics with scripts by Lizé, in 1983 and 1984. Faure also worked for the juvenile press: his comic 'L'Étalon Noir' appeared in Le Journal de Mickey. In addition, he made comic adaptations of Lamorisse's 'Crin Blanc' with the scenarist François Corteggiani in 1988. In the mid-1980s he took on the series 'Les Fils de l'Aigle', again in cooperation with Vaxelaire. Between 1996 and 1998, he illustrated the 'Elsa' trilogy, in cooperation with Makyo for Glénat. Also with Makyo, he made the third cycle of the 'Balade au Bout du Monde' saga. In 2003, he participated in Frank Giroud's 'Le Décalogue' Text (c) Lambiek
Go to Michel Faure's page
Remove from favorite artists  Add to favorite artists
9 comments
To leave a comment on that piece, please log in

Zizanion Magnificent portrait. All the best to you Dersou, the nomadic Goldi hunter! By the way, it is one of the best Kurosawa films! You have great comics and cinema taste dear colleague!
Mar 31, 2020, 1:40 AM