In stephane  's collection
Back to gallery 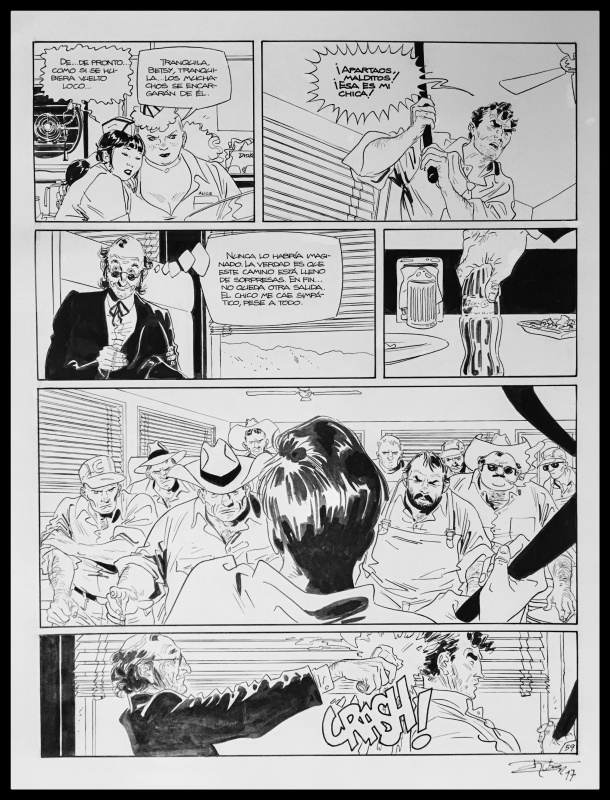 Ruben Pellejero began made his debut in comics in 1983. That year, he started a historical series about Barcelona for the magazine Cimoc ('Historias de Barcelona'). His creative production really took flight when he started collaborating with the Argentine writer Jorge Zentner. Their collaboration started out with 'Las Memorias de Monsieur Griffaton' in 1983, which was followed by 'FM' in 1984 and the series 'Dieter Lumpen'. Pellejero then began working for the French market, and joined the publishing house Casterman and the magazines À Suivre and Corto. Pellejero and Zentner made the award-winning 'Le Silence de Malka' in 1995. Casterman then published the anthologies 'Blues' and 'Tabous', both written by Zentner. Ruben Pellejero has participated in the Frank Giroud comic projects 'Secrets' (the story ' L'écorché' in 2006-07) and 'Destins' (2011). Since 2000, Pellejero has created several graphic novels for the Aire Libre collection of the publishing house Dupuis. The first one was 'Un Peu de Fumée Bleue' with text by Denis Lapière (2000), and it was followed by 'Tour de Valse' (2004) and the diptych 'L'Impertinence d'un été' (2009-10), another collaboration with Lapière. Text (c) Lambiek
Go to Rubén Pellejero's page
Remove from favorite artists  Add to favorite artists

Zizanion Pellejero at the top of his form. This is his best album in the Lumpen series. A truly magnificent page with a well thought-out sequence and sharp, precise lines. Nothing is out of place or excessive. Congratulations!
Jan 19, 2020, 6:35 AM