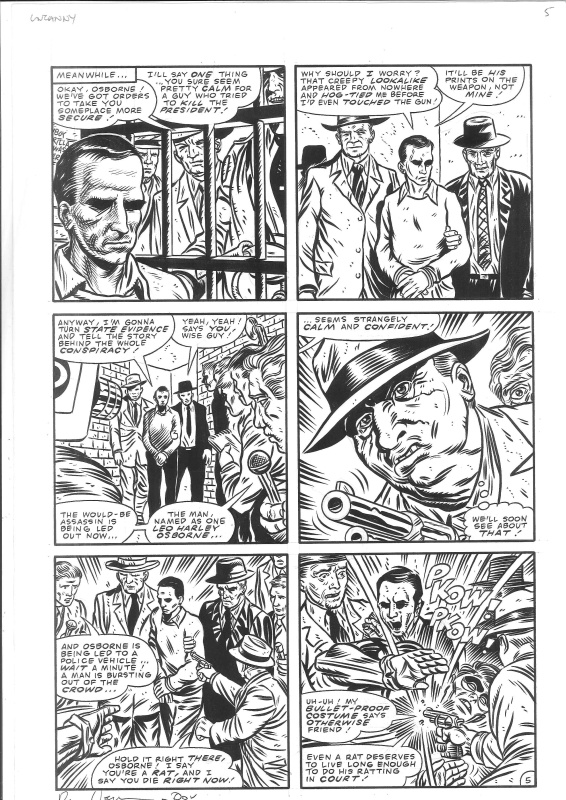 This is page 5 from Tales of the Uncanny - a chapter in Alan Moore´s 1963 series. The series is created as a pastiche of Marvel superhero comics as they were in 1963 - when Moore was a boy and an eager Marvel comics fan. Of course Moore had to include an alternative take on the John F. Kennedy murder in a series called 1963, and this page depicts his take on one of the most spectacular episodes connected to that murder: Jack Ruby´s killing of Lee Harvey Oswald.
Too bad the 1963 series was not concluded.

Rick Veitch has been one of the most prolific comic book writers and artists of the last few decades. He has worked on 'The Teenage Mutant Hero Turtles' and 'Swamp Thing', as well as creating many of his own exciting comic book series. His 'Roarin' Rick's Rare Bit Friends' dream comic was featured in Life magazine, and has attracted dream fans from all over the world. Rick also pioneered cyberspace with Steve Conley, with their virtual comic book convention on the internet. Currently Veitch's work appears in 'Tomorrow stories', where he and Alan Moore have created Greyshirt, a character in the classic tradition of Will Eisner's 'The Spirit'. Text (c) Lambiek
Go to Rick Veitch's page
Remove from favorite artists  Add to favorite artists
1 comment
To leave a comment on that piece, please log in