Sign up
In Philippe Luguy  's collection
Back to gallery

Philippe Luguy saw his first pages published in French magazines like Phénix, Frimoussette, Princesse, Akim, Kiwi, Tarzan, Lancelot and Bugs Bunny. He made his actual professional debut in comics magazines such as Amis-Coop, Pieds Nickelés Magazine, Bibi Fricotin Magazine, Formule 1 and Fripounet. In the latter magazine, he started the series 'Sylvio le Grillon' with scenarist Jérina. Luguy continued the adventures of this insect in Pif Gadget from 1974 to 1982 this time mostly in cooperation with scenarists like Patrick Cothias and Lions. In the early 1980s, Philippe Luguy was a member of Five Star studios (along with Pierre Leguen, Gaty, René Deynis and Max Lenvers), where he worked on projects like a comic adaptation of the television series 'Albator' for Le Journal de Cap'tain Fulgur. In 1981 he illustrated 32 pantomime comic strips that came with Malabar chewing gum, sometimes in cooperation with Mic Delinx (8 strips) and Yannick (16 strips). In that same year, Luguy started his most famous series, the medieval fantasy comic, 'Percevan' (scenarios Jean Léturgie and Xavier Fauche), published initially in Gomme and then in albums by Glénat and Dargaud. In addition, he created 'Karolyn' with scriptwriter Lions at Dargaud in 1989. Text (c) Lambiek
Go to Philippe Luguy's page 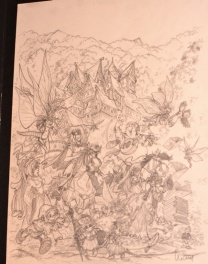 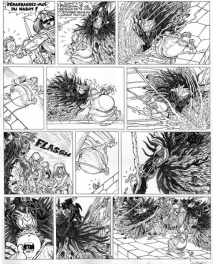 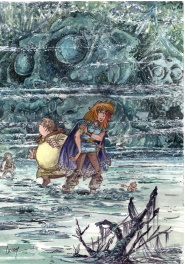 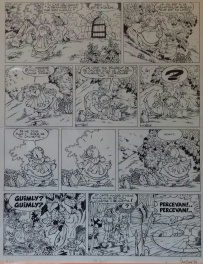