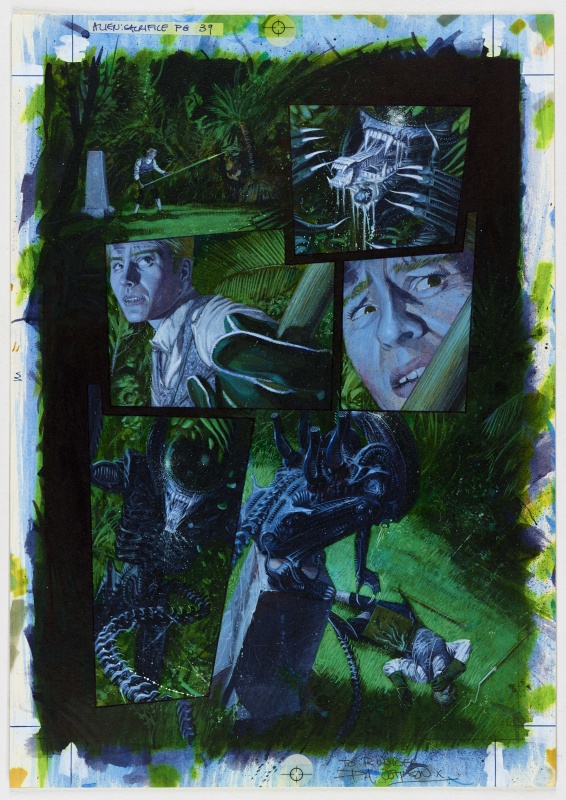 Aliens: Sacrifice is a four-part comic book story that was first published by Dark Horse Comics in its UK-based Aliens magazine, Vol. 2 #9-12, from March-June 1993. It was written by Peter Milligan, illustrated, inked and colored by Paul Johnson. At the time of release it was heralded by Dark Horse as "perhaps the most emotionally powerful Aliens tale you will ever read".
Towards the end of the comic's original serialization in Aliens magazine, it was collected and released as a one-shot prestige-format comic book in the United States in May 1993, with cover art by Paul Johnson.

Paul Johnson (born 13 October 1958) is a British comic book artist. He came to international attention when he painted the art on the fourth and final chapter of The Books of Magic mini-series, written by Neil Gaiman and released by DC/Vertigo in 1993.
Johnson worked abroad for Marvel Comics (Interface, Hellraiser, Children of the Voyager), DC Comics (Mercy, Invisibles, Legends of the Dark Knight) and Dark Horse Comics (Aliens) before working in Britain's home-grown industry for Crisis, 2000 AD, and the Eaglemoss publication Spinechillers.
Disillusioned with the opportunities available to him, Johnson retrained as an acupuncturist and herbalist. He is now in private practice and lectures regularly at LCTA, England's largest college dedicated to teaching Traditional Chinese Medicine.

Paul Johnson is a British comic book artist, who has also worked extensively for the American market. He began his career in the early 1980s with self-published comic books and contributions to alternative publications like Psst! and Escape Magazine. He also released a graphic novel called 'London's Dark', but he gained wider attention with his painted artwork for 'The Road to Nowhere', the final chapter of Neil Gaiman's 'The Books of Magic for DC/Vertigo in 1993. He worked on Marvel titles like 'Interface' (the second 'Espee' series), 'Hellraiser' and 'Children of the Voyager', and was present at DC with 'Mercy', 'Invisibles' and 'Legends of the Dark Knight'. He also painted 'Aliens: Sacrifice' from a script by Peter Milligan for Dark Horse. It wasn't until later in his career that he returned to the British market with artwork for Crisis, 2000 AD and Spinechillers. In addition to his comic book career, Johnson has been a regular writer for music magazine Uncut from 1999 until 2004. He eventually left comics and retrained as an acupuncturist and herbalist. Text (c) Lambiek
Go to Paul Johnson's page
Remove from favorite artists  Add to favorite artists
To leave a comment on that piece, please log in