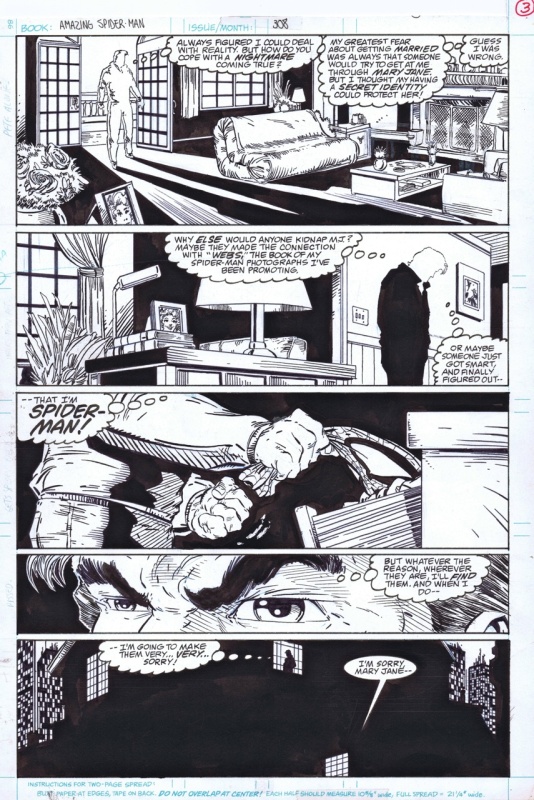 Mcfarlane's work renewed my interest in spidey. He opened up a whole new style of drawing the web-slinger.

This page stands - like any good page - for itself. A nice sequence of shots carry the scene: a long shot of the room, a medium close-up, an extreme close-up of the hands and the mask, an italian shot of Peter's eyes (my favorite!) and finally an extreme long shot of the apartment building.

Todd McFarlane is a Canadian-American comic book creator and entrepreneur, best known for his work on The Amazing Spider-Man and the horror-fantasy series Spawn. In the late 1980s and early 1990s, McFarlane became a comic book superstar due to his work on Marvel Comics' Spider-Man franchise, on which he was the artist to draw the first full appearances of the supervillain Venom. In 1992, he helped form Image Comics, pulling the occult anti-hero character Spawn from his high school portfolio and updating him for the 1990s. Spawn was a popular hero in the 1990s and encouraged a trend in creator-owned comic book properties. Since leaving inking duties on Spawn with issue No. 70 (February 1998), McFarlane has illustrated comic books less often, focusing on entrepreneurial efforts, such as McFarlane Toys and Todd McFarlane Entertainment, a film and animation studio. In September 2006, it was announced that McFarlane would be the Art Director of the newly formed 38 Studios, formerly Green Monster Games, founded by major league baseball pitcher Curt Schilling. McFarlane used to be a co-owner of the National Hockey League's Edmonton Oilers before selling his shares to Daryl Katz. He is also a high-profile collector of record-breaking baseballs.
Go to Todd McFarlane's page
Remove from favorite artists  Add to favorite artists